[Country spotlight] Part 1 - How have hotels in Germany reacted to the lift of travel restrictions? 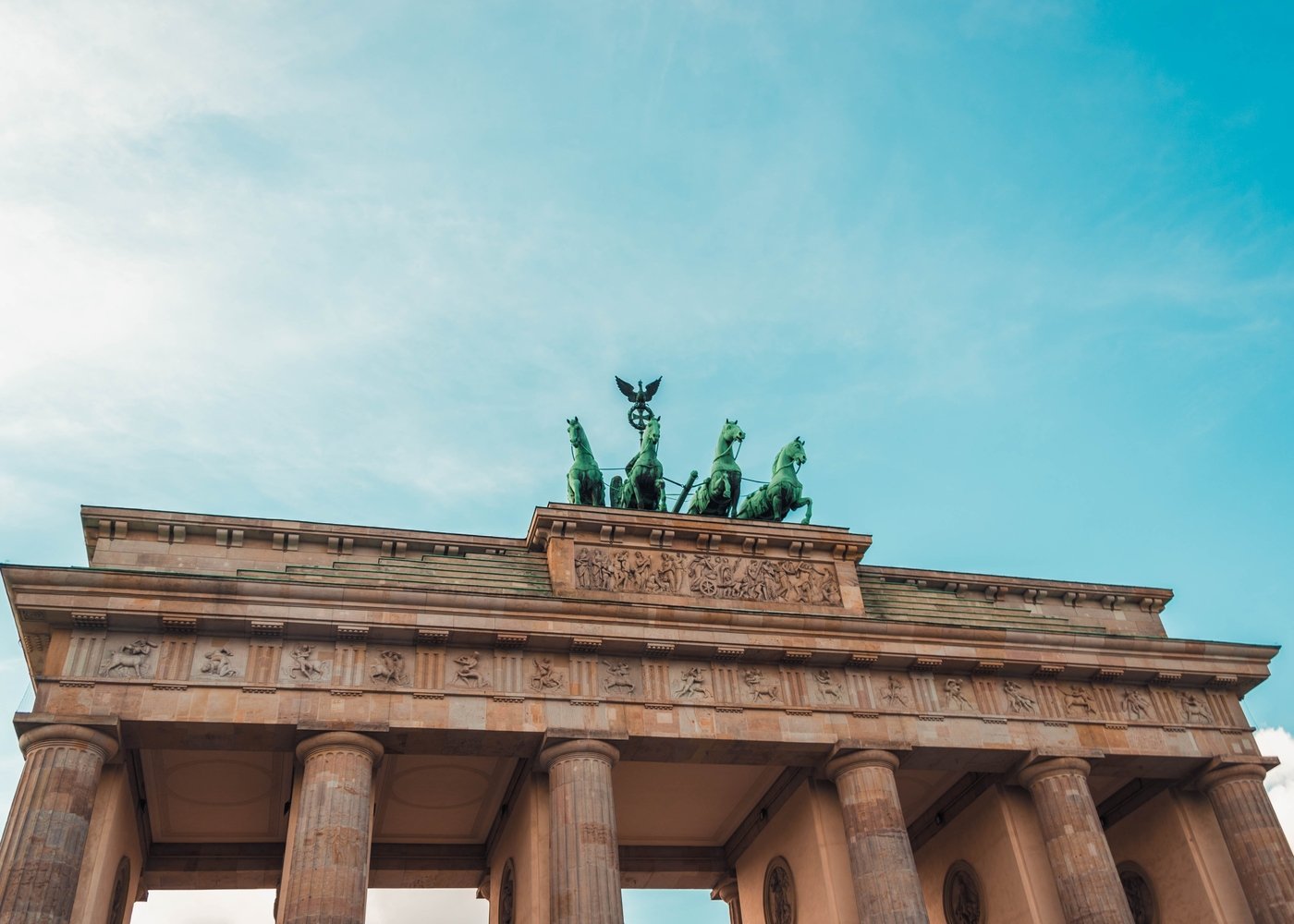 Germany had its first confirmed case of coronavirus on the 27th of January in Munich. At the end of February and the beginning of March, multiple cases were detected in Baden-Württemberg which were linked to the Italian outbreak as well as a large cluster of infections from a carnival event in Heinsberg, North Rhine-Westphalia. ITB Berlin, one of the world’s largest travel trade shows, expecting more than 170,000 visitors from over 180 countries was cancelled on the 28th of February. From this moment, it slowly became clear that Covid-19 was likely to have a substantial impact on hotels tourism businesses in Germany.

In the following, we will have a look at hotel open rates and rate developments throughout Germany as per the examples of Berlin, Cologne, Frankfurt, Hamburg and Munich.

Finally, we will have a detailed look at demand levels throughout the rest of 2020 and the first half of 2021 using OTA Insight's brand-new Market Insight technology.

When looking at the re-opening timeline in Germany as a whole it is important to note that due to the German federal and state system there are different rules in each state, resulting in broad ranges for re-opening dates.

In a global analysis published by the Deep Knowledge Group, Germany currently ranks second, right after Switzerland with regards to its “COVID-19 Safety Ranking”:

Hotel Opening Statistics throughout the Crisis

Throughout the crisis, up to 61% of hotels in major German cities closed their doors for a period of time. Especially in mid and end of April two markets saw a significant decrease of hotel availability: 45% in Frankfurt and 61% in Hamburg. Berlin, Cologne and Munich saw an average of 55% percent of closed properties during this time.

From Monday the 4th of May onwards there was continuous improvement in availability throughout the month of May. At this point in time, Hamburg recorded the least hotels open at 43% while Frankfurt was leading the field at 54% open properties. Back then, the 1st of June was targeted by all markets as the date to aim for when re-opening (around 90% open availability).

Looking at this snapshot, it is also clear that Monday the 11th and 18th were targeted by several hotels as prospective opportunities for a re-opening with Cologne taking over the lead from Frankfurt with availability of 69% and 75%. In the above graph, slight dips in availability can be found for Friday and Saturday arrival dates. While hotels were continuously re-opening availability for weekdays, this is likely to be caused by either hotels closing for weekends due to low leisure demand or length of stay (LOS) restrictions such as a minimum 2 night stay imposed by revenue managers. The latter is usually a practice for high demand days and there is a chance some previously set LOS restrictions had not been removed. This pattern for weekends was particularly strong in Berlin and Hamburg. While Frankfurt and Cologne show slight changes for these dates, weekend availability in Munich appears to be untouched.

In the snapshot taken on the 11th of May, there are a significant number of hotels that pushed their opening dates further out than previously recorded. Taking Cologne as an example, we can see that only 49% of hotels actually had opened their doors, a decrease of 19 percentage points compared to the previous snapshot. Most markets showed similar behaviour and revised their strategy during this week.

While the 1st of June continued to be targeted by the majority of hotels, during the weeks of the 18th and the 25th of May, there is an upward trend of hotels re-opening during these weeks compared to the 11th of May: 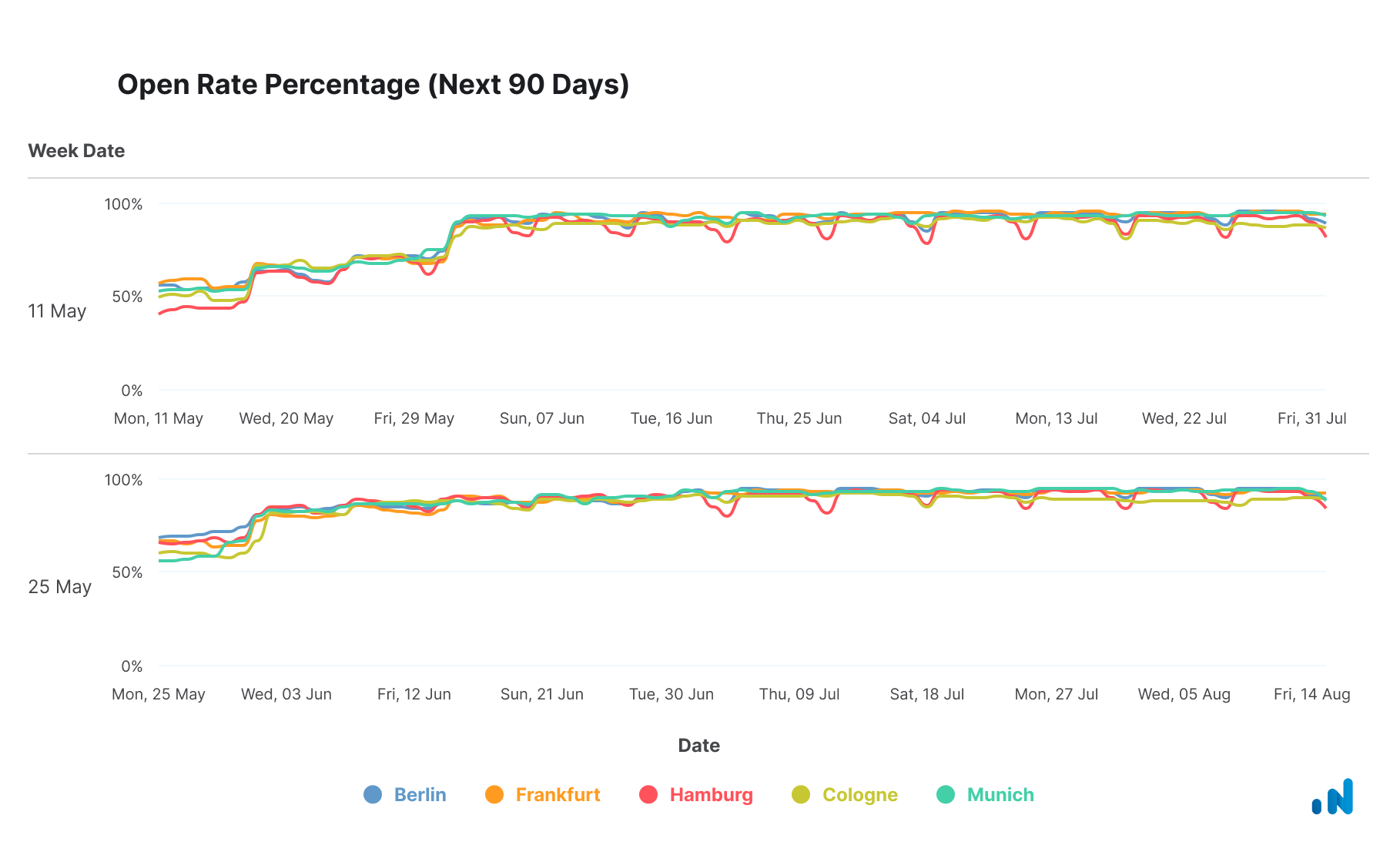 In Berlin, Cologne and Frankfurt, around 10% of hotels opened their doors in those two weeks. While Munich only had a change of 4 percentage points at that time, Hamburg surprised with 25% of hotels opening up availability for the remaining arrival dates in May. 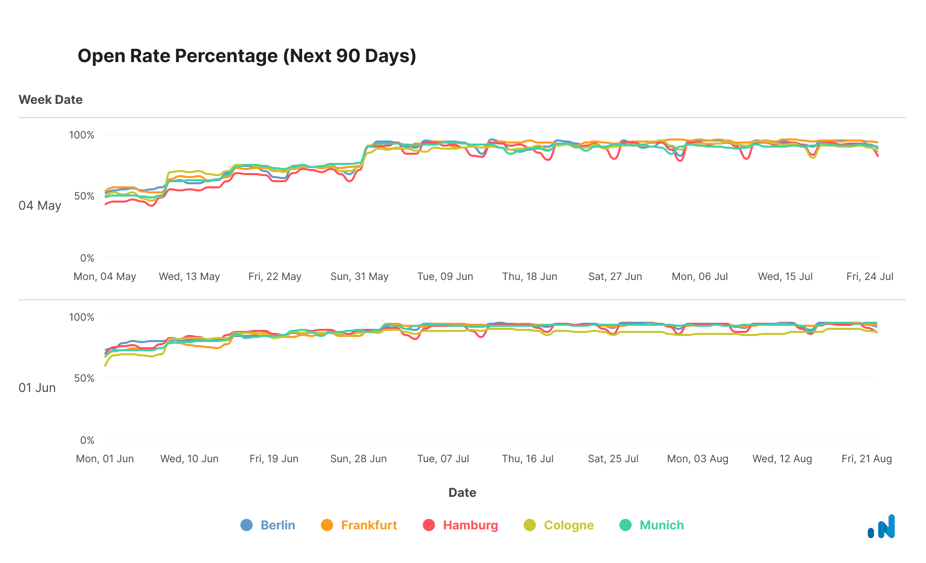 At the time of writing, on the 1st of June most hotels did not follow through with their re-opening strategy from the beginning of May. Berlin currently stands at 73% and the largest number of open hotels, closely followed by Hamburg at 69% and Frankfurt and Munich at 67% each. In contrast to the confidence that the hotel market in Cologne showed at the beginning of May, only 59% of hotels are currently open there, a decrease of 29 percentage points from the prospective opening rate on the 4th of May. Frankfurt and Munich saw with a similar development in the form of a decrease of 27 and 25 percentage points while opening rates in Berlin and Hamburg decreased slightly less (21 percentage points).

Throughout the month of June, there is a constant increase of open properties with the 1st of July reaching similar levels that had been targeted for the 1st of June back at the beginning of May. This indicates the last few hotels keep pushing out their reopening to July. In Berlin, Cologne and Hamburg in contrast the pattern of weekend restrictions continues with up to 10% of hotels in Hamburg placing restrictions on weekend arrival dates in July:

Which Markets have been the most Dynamic?

As recorded at the beginning of May, Berlin and Frankfurt had the largest number of hotels actively adjusting their rates. Frankfurt, being particularly reliant on trade fair business saw a focus of negative adjustments on arrival dates between the 11th and 14th of May, likely caused by the cancelled IMEX and Optatec fairs. While the percentage of hotels adjusting rates for arrival days in May in Cologne, Hamburg and Munich ranged between 10% - 18%, Berlin saw an increase of adjustments during the week of the 18th of May leading up to the Ascension Day weekend, for which 24% of hotels adjusted their rates.

The majority of these adjustments were negative, averaging at -20%. Most other markets did not see significant changes in volume and negative adjustments for these arrival dates, which leads to the assumption that Berlin was strongest hit by the lack of demand for this usually popular city-trip weekend.

As early as at the beginning of May, there was a focus on mid-week arrival dates after June 1st. Hamburg was leading this charge with an average of 29% of hotels making adjustments for Thursdays (11th, 18th, 25th of June). These adjustments were mostly positive and ranged between +18% to +22% in rate. Hamburg’s positive ‘Thursday-Trend’ then continued for arrivals on Thursday the 2nd, 9th and 16th of July:

A subtle trend that can be observed for most markets is the collective drop of adjustments for weekend arrival days and Sundays. It seems like commercial and revenue teams have either been focusing on optimizing weekday revenues through pickup of business travel with less focus on optimising weekend leisure revenues or they are confident in the right sizing of weekends already. This trend continues in snapshots taken on the 11th and 18th of May for arrival dates up to the beginning of July as per this example:

While Frankfurt records the largest number of hotels that have not adjusted rates for weekend arrival dates, Cologne seems to be the only market that largely defies this trend.

Speaking of Cologne: early during the pandemic the city implemented very strict measures forcing hotels to close. After the Cologne-based hotel chain Dorint successfully went to court, hotels were allowed to open for business travellers at the end of March.

When it came to adjusting rates for the prospective re-opening, the market was more of a late starter even though Cologne had a similar open rate as other markets, a much smaller number of properties adjusted their rates during the first and second week of May. Arrival days such as the 17th of June, that prompted 34% of Hotels in Frankfurt and 28% of Hotels in Berlin to adjust their rates, only lead to 11% of hotels in Cologne making adjustments:

Surprisingly, this trend majorly shifted during calendar week 21 and Cologne has since been the most dynamic market for 3 weeks in a row:

Berlin, home to a large supply of rooms, remained steadily dynamic and competitive throughout May. Frankfurt and Hamburg displayed similar trends with Frankfurt recording more adjustments at the beginning of May before turning more static towards the end of the month, while Hamburg shows a more distinct focus on specific weekdays and arrival dates rather than even development. Munich has not changed its position in the national comparison significantly and displays a comparatively low number of adjustments. This is likely impacted by Bavaria’s comparatively ‘late’ and more conservative opening strategy.

Frankfurt on the other hand has seen an almost constant equilibrium of positive and negative developments. Positive as well as negative adjustments peaked at +19% and -18% for single arrival dates but generally moved around the +-10% mark. Frankfurt is one of the market displaying higher discounting as well as yielding activity.

Similar to developments in Berlin, Hamburg made its more drastic positive changes throughout the first two weeks of May for arrival dates from mid-June onwards. While our systems recognized positive rate changes of up to +28% during the first weeks of May the highest positive rate adjustment during the last week of May was for the 18th of August at +17%. After the first week of May, negative adjustments focus mostly on weekend arrival dates but rarely exceed the -10% mark.

Together with Berlin, Munich has proven to be one of the more static markets. Positive and negative adjustments don’t seem to be made for specific arrival dates or periods: instead the market seems to generally adjust rates up or down for all next 90 arrival days. Like Frankfurt, Munich sees an even distribution with a slightly stronger negative tendency, particularly throughout the last two weeks of May.

Want to see how Rate Insight can help you make smarter pricing decisions?