[Country spotlight] Part 2 - When are we seeing a Pickup in Demand in Germany? 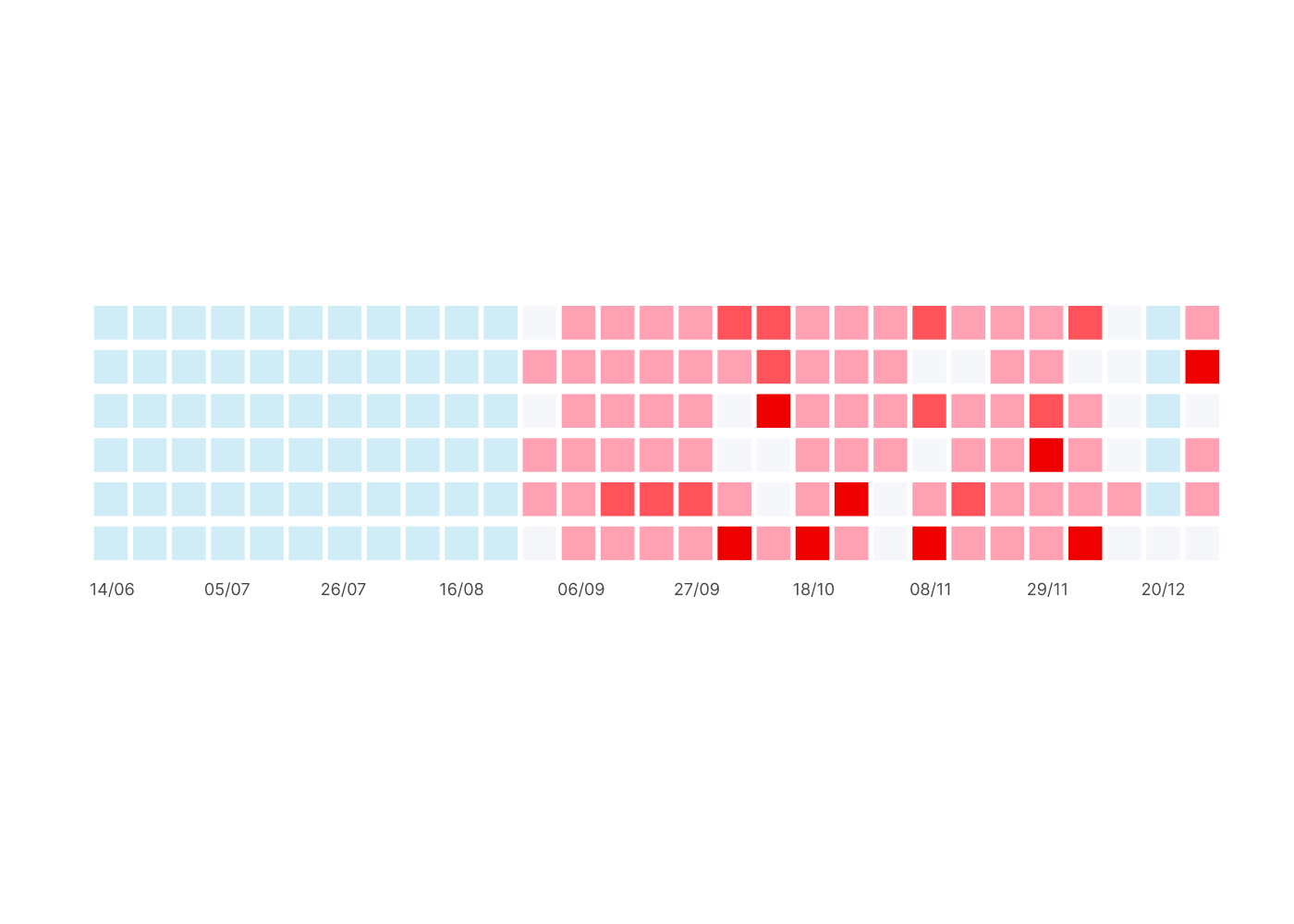 As historical data is no longer a reliable tool for predicting future demand levels, let’s use the latest artificial intelligence in demand prediction, Market Insight, to analyse the return of demand for markets across Germany. OTA Insight algorithms in combination with machine learning classify demand for each day within 6 categories ranging from very low to very high demand. Throughout this analysis there is a focus on days at medium demand levels or above:

How are demand levels for the remainder of 2020?

At the time of writing, no significant developments in positive demand could be found for June, July and August as many travellers seem to await the opening of the EU’s internal borders on the 15th of June and external borders in July. 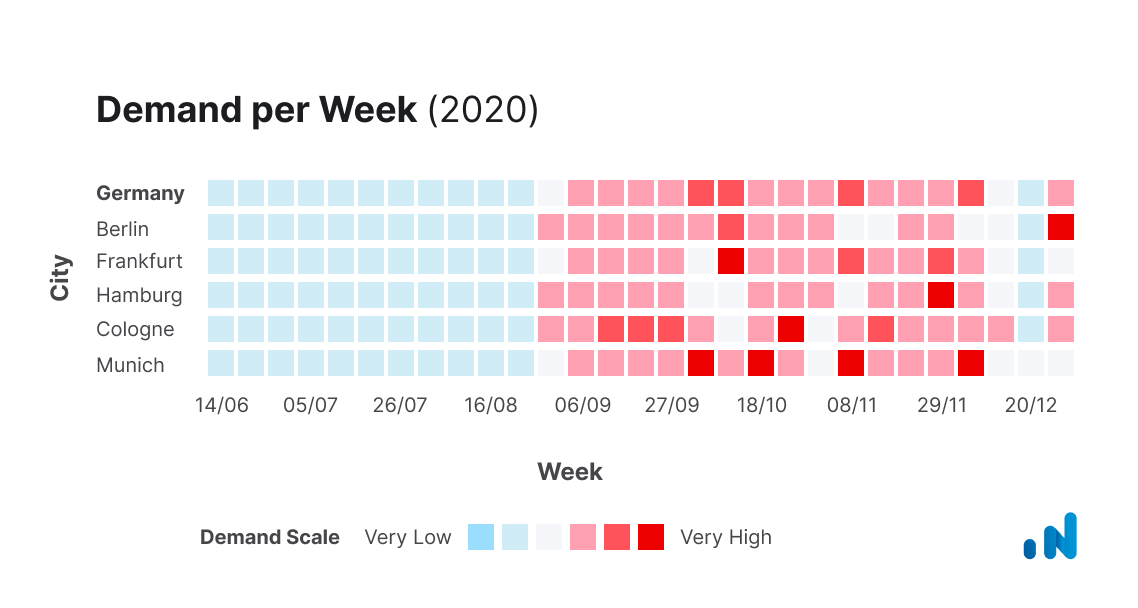 Demand for September in Berlin is evenly distributed and only the 13th and 20th of September (both Sundays) show relatively lower demand levels. While the highest levels of demand for Cologne in September are midweek arrival dates including one weekend, Frankfurt sees increased demand exclusively for Mondays, Tuesdays, Wednesdays and Thursdays. Hamburg, similarly to Berlin, sees an even distribution of demand in September with a particular focus on Fridays and Saturdays while Sundays show low demand levels. It’s a similar picture in Munich where all weekdays except for Sundays show slightly increased demand from the 7th of September onwards.

In October, November and December we also see a relatively even distribution of demand levels. From the beginning of December, demand for Frankfurt and Munich drops. While we are also seeing a slight drop of demand throughout December in Hamburg, Cologne and Berlin, these markets pick up another last wave of demand during the last week of the year with Berlin positioning itself as a very sought after destination for the time around Christmas and New Years Eve. 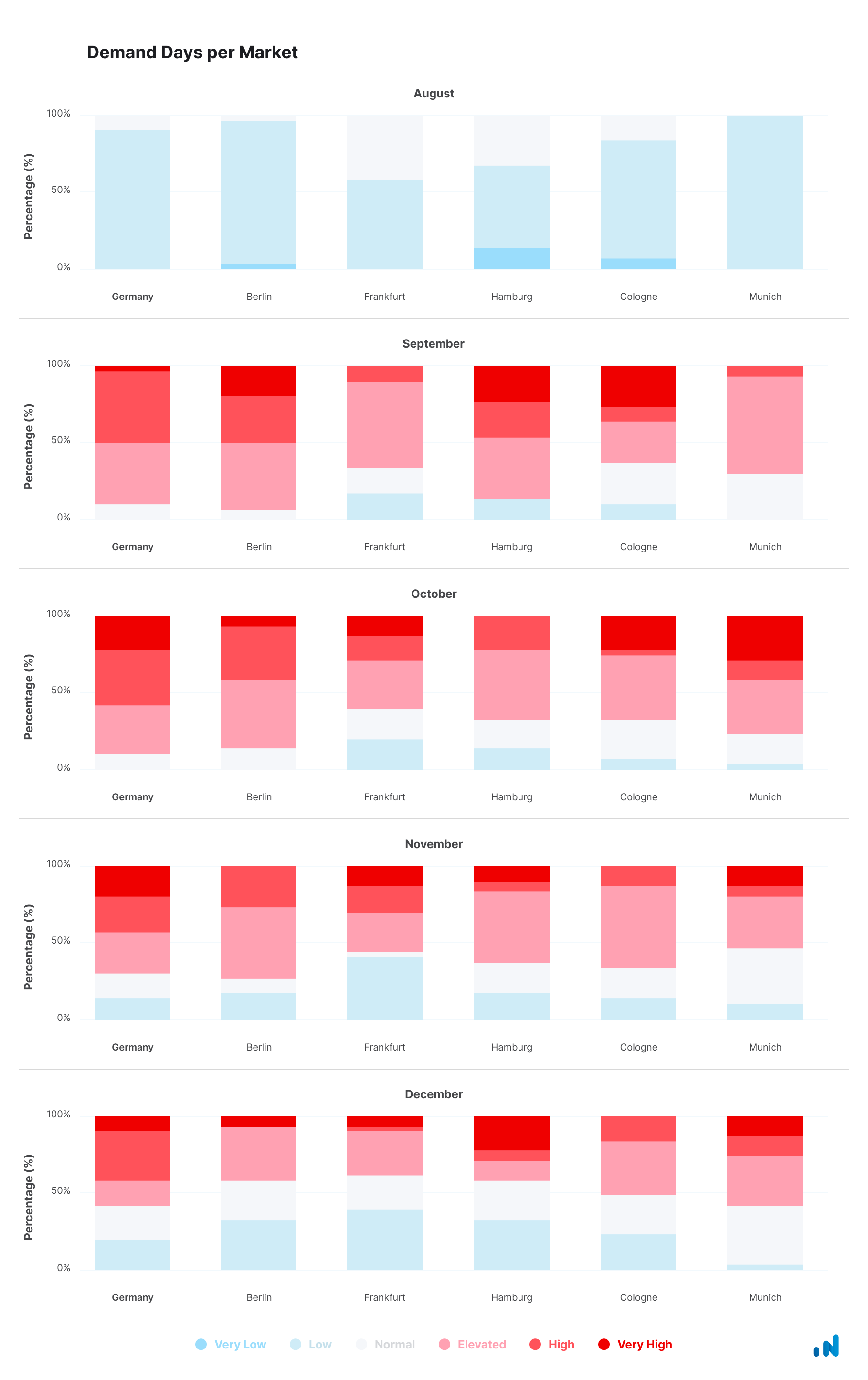 The largest percentage of days with increased demand throughout September, October, November and December is currently present in the Berlin market with 66%. After Berlin, Cologne sees the second highest percentage value with 62% of days showing an increased demand. Hamburg and Munich are following with 60% and 58% respectively. With 55% of days showing a higher level of upper funnel demand, Frankfurt is currently ranked last. 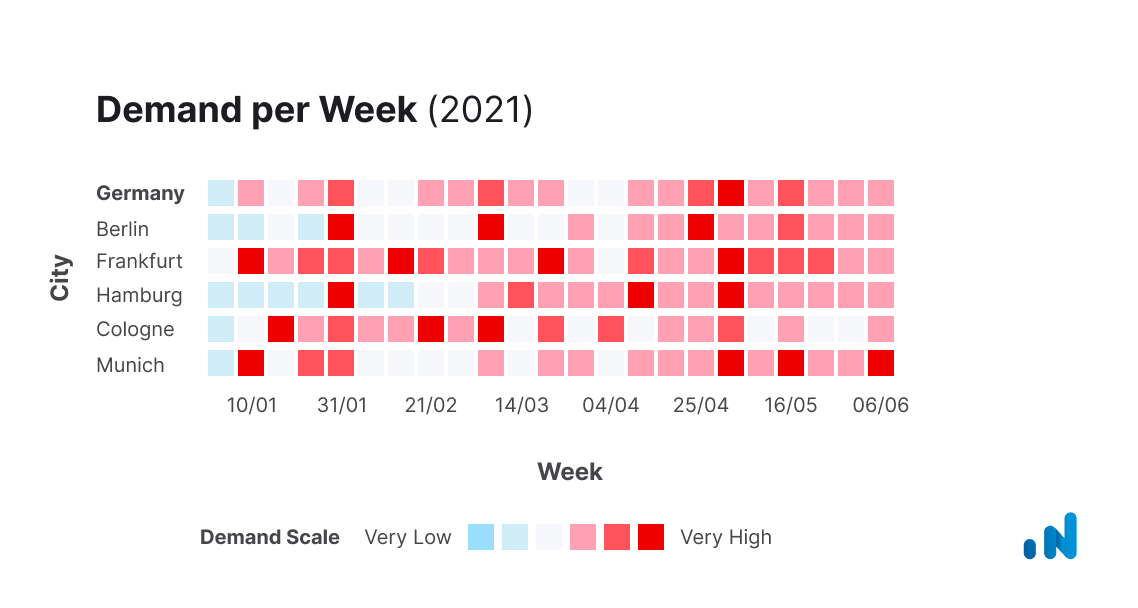 However, going into 2021, Frankfurt sees a strong pickup in demand with continuously increased levels until the beginning of June, the only exception being one week in April. Cologne sees a similar but slightly less significant development. While the city experiences high demand levels throughout the first 2.5 months of the year, it misses out during four weeks in April, May and June, when all other cities see constantly increased demand levels.

Hamburg finds itself in the midfield and picks up most demand around the beginning of March. While Berlin had strong demand levels throughout the remaining months of 2020, demand in 2021 only significantly picks up at the beginning of April. Prior to April, we could only find 3 weeks during which upper funnel demand for Berlin reached increased levels. Munich has a similar fate. Although there are 6 weeks with increased demand throughout January, February and March, elevated demand levels in 2021 only become consistent at the beginning of April.

Needless to say, state of the art demand prediction technology and fast decision making supported by artificial intelligence is rapidly gaining importance for hotels. Commercial teams need to have the right tools to detect specific dates and timeframes with increased demand levels to focus their time on streamlining their revenue strategies for these opportunities. While preparing for the uptick in the market, the resilience and competitive decision making of commercial teams will become absolutely crucial.

Want to see how Market Insight can help you uncover new booking intent and revenue opportunities?