Country in focus: Spotlight on travel demand and hotel pricing trends in Belgium 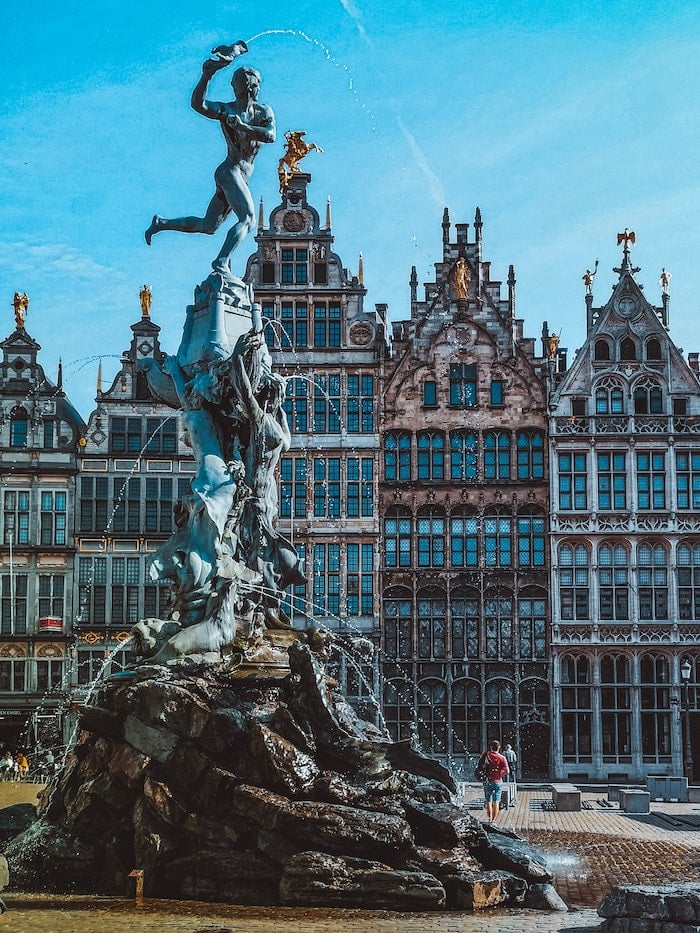 Recovering from a setback like COVID-19 is never easy, and Belgium’s tourism industry knows this only too well. The pandemic hit the country – and its hospitality sector – hard, just like its European counterparts, with an initially high mortality rate and strict lockdowns emplaced.

Returning from that damage has been a long road, but the green shoots are now easy to see. Our data shows that Belgium’s cities are quickly making up lost ground, as prices have exceeded their 2019 levels across the 2022 summer period.

If trends continue, we should see a near return to pre-pandemic visitor levels in the statistics for this year’s peak travel period and a much-improved pricing picture in 2023 compared to the last two years.

As 2022 has progressed we have seen soaring interest in Belgium as a destination in our search evolution indexes. That rise of interest in major destinations in the country compares favourably to nearby tourism hotspots.

Looking first at flight searches, interest has continued to trend upwards across 2022 so far. From May to July, around one-and-a-half times as many searches are being made for flights to Brussels than January 2022. Search demand levels at the time of writing stood at 2 times that of the start of the year.

This rise in interest is greater than the relative level for Paris, but slightly below Amsterdam, which are useful near-peers to compare to. It shows that Brussels is fitting within the general return of interest and demand to North-western European destinations. 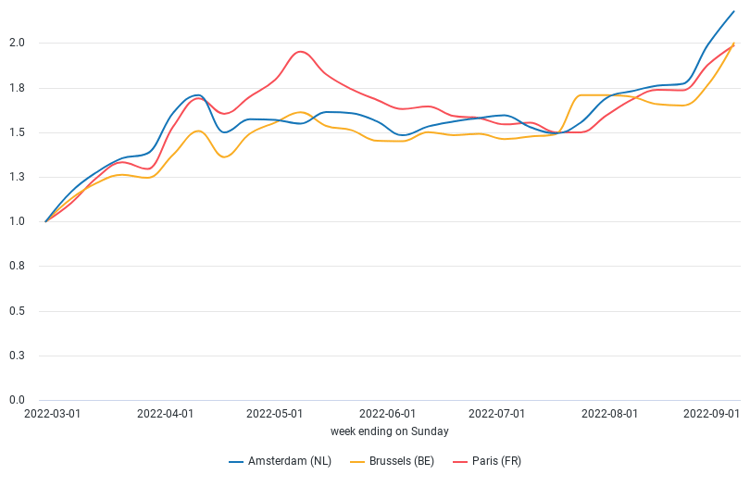 Belgian cities fare even better when we look at data for searches for hotels made on Online Travel Agent (OTA) and metasearch sites.

Here, our search evolution index shows very strong peak period performance for Antwerp, Bruges and Brussels, all of which follow an extremely closely matching pattern throughout the year, indicating a broad-based recovery in travel within and to the country.

For the key vacation periods of July and August 2022, hotel search interest is around 23 times the level seen at the very opening of the year in these cities, which outperforms the growth in interest for Amsterdam and Paris. 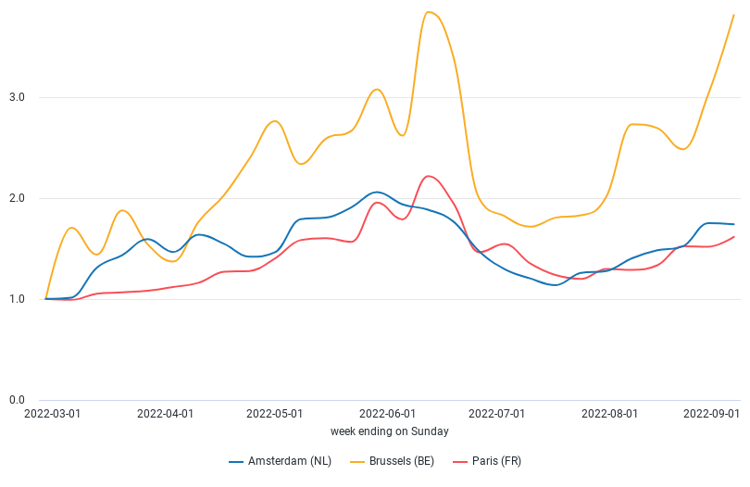 By observing Global Distribution System (GDS) searches within Market Insight, you can get a strong indication on the state of corporate travel. Here we can see that Brussels, a European corporate and political powerhouse is vastly outperforming its neighbours. GDS searches are up 3.8 fold from the start point, whereas Amsterdam is up 1.7 fold, and Paris 1.6.

Turning next to how that uptick in interest translates to prices on the ground, we can see how the heightened interest is translating into more demand and a better pricing picture, but that it is taking a little time to fully come to fruition as Belgian destinations lag slightly behind their peers in price growth.

As we can see in the pricing graph, we only see consistently improved pricing following on from the jump in OTA and metasearch volume, and therefore demand, in May 2022.

Whereas hotel room rates in Antwerp and Bruges generally were at nominal parity with 2019 levels, and Brussel hotels were largely faced with pricing well below 2019 levels, during the 2022 peak period prices have pushed upwards to where they consistently sit above pre-pandemic figures from June onwards.

However, adjusting for inflation means that only Brussels is in truly positive pricing territory as of the latest data point, especially as currently high inflation rates eat away any gains in nominal hotel pricing.

StatBel, Belgium’s official body, said in its August tourism data release that overnight stays were down just 3% in April compared to the same month in 2019.

These figures fit within the statistics being released by trade and official bodies in Belgium for the year so far. The Brussels Hotels Association reported hotel occupancy rates were at 66.6% in July, 8.2% below 2019 levels, although it is worth noting that 2019 was an all-time peak.

These data points suggest we are rapidly approaching tourism levels akin to pre-pandemic, which can then support much better room rates. In order to adequately capture returning demand it is vital to use a leading rate shopping tool, that supplies you with real-time rate intelligence.

As more data is released on confirmed stays in Belgium, we can expect there to be a continued improvement in performance that follows our data, which is clearly showing growing demand across the peak holiday period in Europe.

Pricing level for hotels in Brussels: Forecast prices compared to 90 days prior 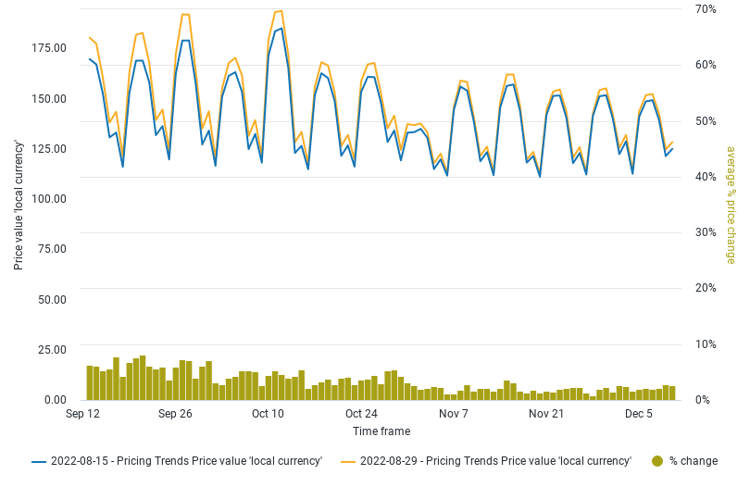 Forward-looking data supports this trajectory. There is continued pricing optimism for Belgian cities, indicating robust future demand being sensed by the market, although this does begin to tail off towards the end of 2022.

Comparing prices currently advertised versus their typical level 90 days prior to the point of extraction (in this case in September 2022) prices have been moved upwards across the board for the remainder of 2022 in Brussels.

Typically, these price rises have been double digits, with room rates advertised on the 21st of September 2022, coming in over 8% higher than where they were 90 days ago. This shows that hoteliers are sensing an improving market and pricing accordingly.

The level of increase diminishes as we look forwards, but still, prices in November are around 3% higher than advertised in mid-Q2 2022. This points to a relatively strong market for Belgium that carries forward the positive momentum of the year so far.

The return of demand is also impacting hotel pricing and promotional strategies within key destinations, allowing revenue managers to be more aggressive in cutting back flexible rates and discounting.

Notably, the tactical change tracks our leading demand indicators. We can see this in the inflection points where revenue managers in key destinations changed their rate strategy, most notably in Antwerp.

As searches and leading demand indicators ticked up from May onwards, rate strategy has been able to shift, with the percentage of hotels in Antwerp offering semi-flexible room rates cut in half from the first week of May to the last data point available in late August.

Brussels has had a more consistent downward trajectory across the year so far, but the share of properties with semi-flex rates is now less than a third of what it was at the start of the year. 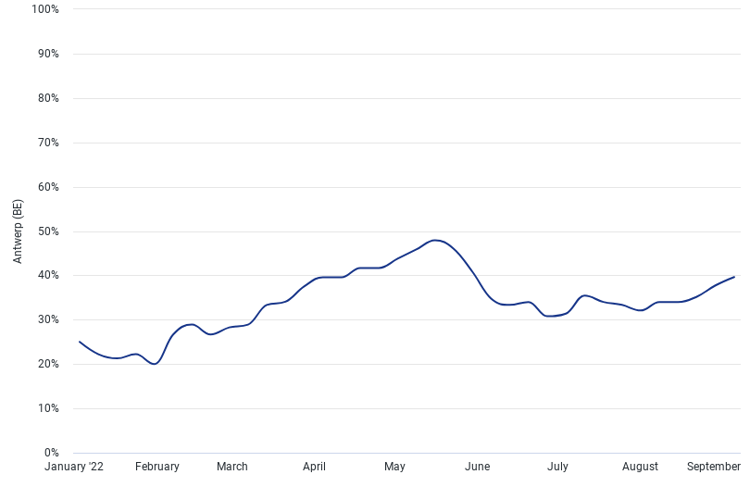 Similarly, the prevalence of mobile discounting has fallen in Antwerp from mid-May to the start of August. The share of hotels offering no discount at all has risen by about 16 percentage points over that period from 52% to around 68% by the endpoint. This starts to rise again in September as we move out of the peak summer period.

These trends underline the turnaround in consumer confidence with regards to the travel sector across the year so far and that there are far more leisure trips being conducted within the country.

This has created a much stronger floor for hotel commercial professionals to work with, creating upward pressure on room rates and a conjoined downward trend in discounting and flexible offers.

While overall levels of travel within Belgium are only just beginning to come close to 2019 all-time highs, this is positive news for the country’s tourism sector.

There is, however, some weakening in pricing looking further out to the end of this year, and the inflationary environment and squeeze on consumer discretionary income we are likely to see across the winter period will dampen the bounce back.

Nonetheless, this represents a far better outlook than what we have seen in the very recent past and the prospect of finally pushing above 2019 overnight stays should hearten hoteliers across the country, giving them a strong base for the coming months.