Hotel distribution trends and other notable topics from HEDNA LA 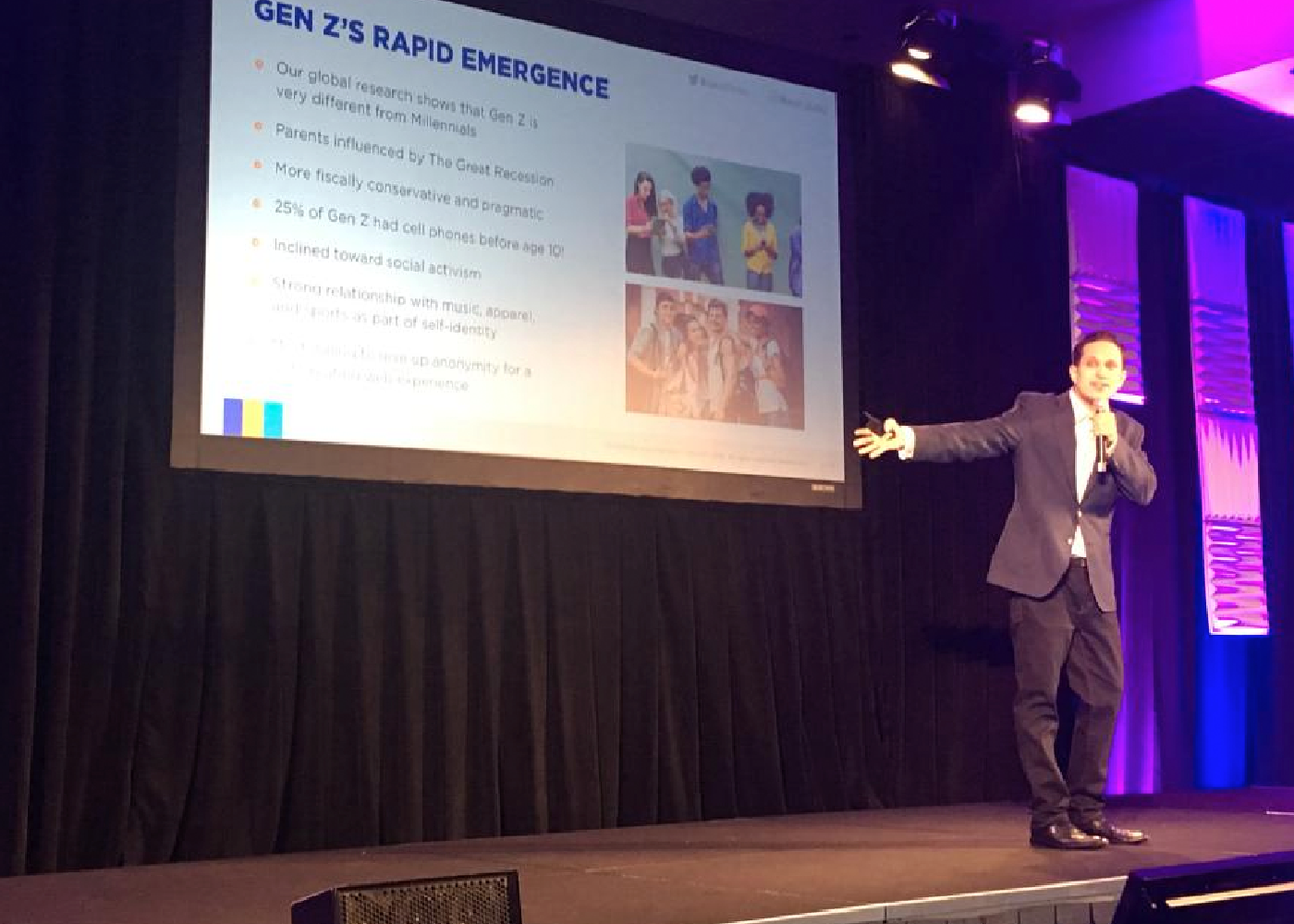 Distribution is an essential piece of the industry; without it, there would be no products to market and no rooms to sell. When it comes to hotel distribution solutions, there’s one organisation that facilitates the connections and conversations that both push and pull this sector of hospitality ahead: HEDNA.

This year’s North American conference in Los Angeles was full of forward-looking ideas and rearward reflections. After absorbing two days of programmed content and informal conversations with colleagues, we pulled out the notable trends and topics capturing the attention of hotel distribution professionals.

Without a doubt, the most lively and engaging keynote came from the energetic Jason Dorsey. As the founder of the Center for Generational Kinetics, Dorsey (pictured below) has a nuanced perspective when it comes to behavioural differences across generations. This type of perspective is inherently useful for hotels crafting effective distribution strategies that match inventory to preferred channels of specific demographics.

Dorsey calls this “predictability by scenario”, which refers to how demographers organise generations into cohorts. It’s quite similar to how hoteliers craft personas, and serves as a great reminder to carefully consider each persona’s predictable behaviour to ensure the most accurate match. When done well, hotel marketers and revenue managers can fully leverage a nuanced approach to their channel, pricing, and positioning strategies.

Often, Dorsey says, “why someone doesn't do something says more than why they do it”. This applies to how you approach your customer relationships. When you know what drives their behaviour - both positively and negatively - you have more control over all aspects of the hotel’s operation. 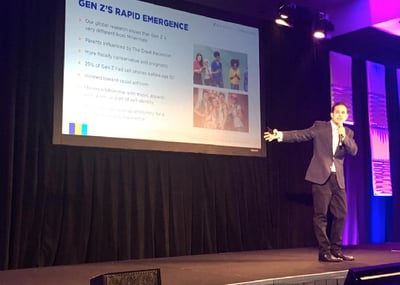 An off-hand remark from Dorsey stuck with us. He was explaining how the generations are defined, as far as which birth years belong to which groups. Each generation requires relatively similar behaviours, and is usually defined by a seminal moment, such as 9/11 for Millennials.

For generations to stick, there must be this shared experience. Put another way, “trends require density to gain traction”. Without this core density, trends fade away without a lasting impact. The concept of density is a useful litmus test for hospitality professionals trying to cut through the relentless onslaught of new and emerging trends. When evaluating if your hotel should pilot new technology or worry about an emerging trend, consider its density. Does the problem/technology have the density that indicates staying power? If it seems fleeting or isolated, it’s likely not yet worth attention.

The evolution of the OTA

The OTA is in transition. In a post-session conversation with TechTalkTravel, Booking.com’s Todd Dunlap highlighted the global brand’s expansion beyond just the accommodations:

“At Booking, we tend to follow customer behaviour and demand. Customers have told us that, beyond accommodation, they want to do things where they stay. So, with Fare Harbor and other work we're doing, we’re definitely chasing after those signals. We're still just scratching the surface of this opportunity.”

“Instead of being a collection of individual brands operating travel marketplaces, we are now in a group that is leveraging the assets of data and technology of all brands under the Expedia Group umbrella.”

Reading between the lines, it's clear that the major OTAs see deceleration in market share growth, and are looking beyond bookings. This evolution becomes especially critical as the costs of distribution technology drop alongside the growing dominance of Google Hotel Ads. Today’s distribution landscape is one where hotels of all sizes can profitably pursue more direct bookings with less reliance on the main players. It depends on cost, says OYO’s Calvin Anderson:

“It all comes down to: who’s cheapest to be on the shelf with?”

The debate around wholesalers and static versus dynamic pricing rages on. The reality for most hotels is that there's no way to control onward distribution, which makes it nearly impossible to shut off a single offending channel, says Omni’s Andrew Rubinacci:

“A hotel has all these feeds coming in. Even if you were to shut off one, you’re still on the shelf - although it may not be that rate. You need to understand how [distribution] flows back and forth.”

There's also a massive issue when a hotel prices its best available rate (BAR) dynamically but maintains static pricing with wholesalers. This can lead to dramatic fluctuations that push production to static rates during times of compression. As a hotel’s dynamic price rises along with demand, consumers are more likely to be exposed to a static rate as intermediaries pursue conversions. The larger the gap, the more costly to a hotel.

Preparing for the downturn (what downturn?)

The inevitability of a downturn in the US and global markets was up for some debate throughout the two-day event. Some expressed concerns that the industry is talking itself into a downturn. And there may be some truth to this, as there were plenty of discussions related to a softening of the global economy.

Regardless of whether a downturn actually happens, most people whose views we captured agreed that advance preparation is key. Jordan Hollander from Hotel Tech Report, who moderated a panel on transforming the landscape through technological collaboration, positioned this as “tech resilience,” saying:

“While we’re talking about technology, under the surface it's all about changing skills and changing organisations. As we move into a downturn, keeping a tech-savvy staff with business acumen is critical. While in the past, we were dealing with clunky infrastructure, today’s technology should make our lives easier and better.”

With technology that both increases productivity and boosts staff satisfaction, hotels make better use of existing staff while dulling the impact of turnover. It's all about running a tight operation, which leads to resilience during a downturn.

Another interesting outcome to consider: technology may be a sharp double-edged sword in a downturn. The pivot to data-driven decision-making could lead to panic pricing driven by algorithms compensating for softer demand with lower rates. The hospitality industry has yet to experience a significant downturn since turning to automated data-driven pricing decisions. We’ve yet to see how this technology fares in an unfavourable pricing environment that pits hotels against one another for guests. There's a distinct possibility that algorithmic decision-making could push prices much lower than they would go in previous downturns -- perhaps even lower than demand would suggest. This “panic pricing” would be a huge issue for the industry.

The role of loyalty in distribution

Even though Loews terminated its YouFirst loyalty program in 2018 after determining it wasn’t “enticing” or “relevant, the hotel’s Chief Revenue Officer Monica Xuereb sees loyalty as “the main tool in the toolbox” to “hold onto direct bookings:

“I say that coming from an interesting place, as a company that doesn't have a loyalty programme yet still runs high occupancy [around] 80%. We show loyalty to our customers in different ways, by delighting them when they come to our hotels. For us, being smaller, a loyalty programme is expensive. It's not free.”

However, loyalty has evolved immensely in a digital world, says OYO’s Calvin Anderson:

“Loyalty, as we have traditionally known it, was about access to a qualified consumer. Modern digital technologies have washed that away. Today, a loyalty programme has to deliver a true quality brand, and this costs money. Loyalty has to be completely redefined because it no longer brings access to qualified consumers. I can be nobody and jump on the meta-channels and Facebook [and] target exactly what I want likely at a cheaper cost.”

The takeaway is that hotels must carefully consider their own loyalty structure to give consumers a good reason to book direct. Especially if sharing benefits with intermediaries, rather than preserving perks for bookings in the direct channel, hotels must calculate the true cost of acquiring customers. One caveat, Anderson continues, is that a loyalty-as-direct-booking tool only works if the consumer sees the value:

“The landscape we are looking at: I'm not even going to know who or how I booked, and I don’t care. We can’t forget to give the consumer a value proposition for booking direct!”

Bringing it all together

Distribution continues to be the unsung workhorse of hospitality. It’s a technical topic, but one that reaches across all aspects of the industry. As we explored in yesterday's article on increasing control in a complex, blended environment, hotels that recognise these overlaps across departments are one step ahead of the rest. An honest appraisal of these intricacies translates into a strong competitive position that’s just that little bit more insulated against shifting market dynamics.

Download our industry review on navigating the changing distribution landscape for free.