[City spotlight] How are hotels in Vienna preparing for the lifting of travel restrictions? 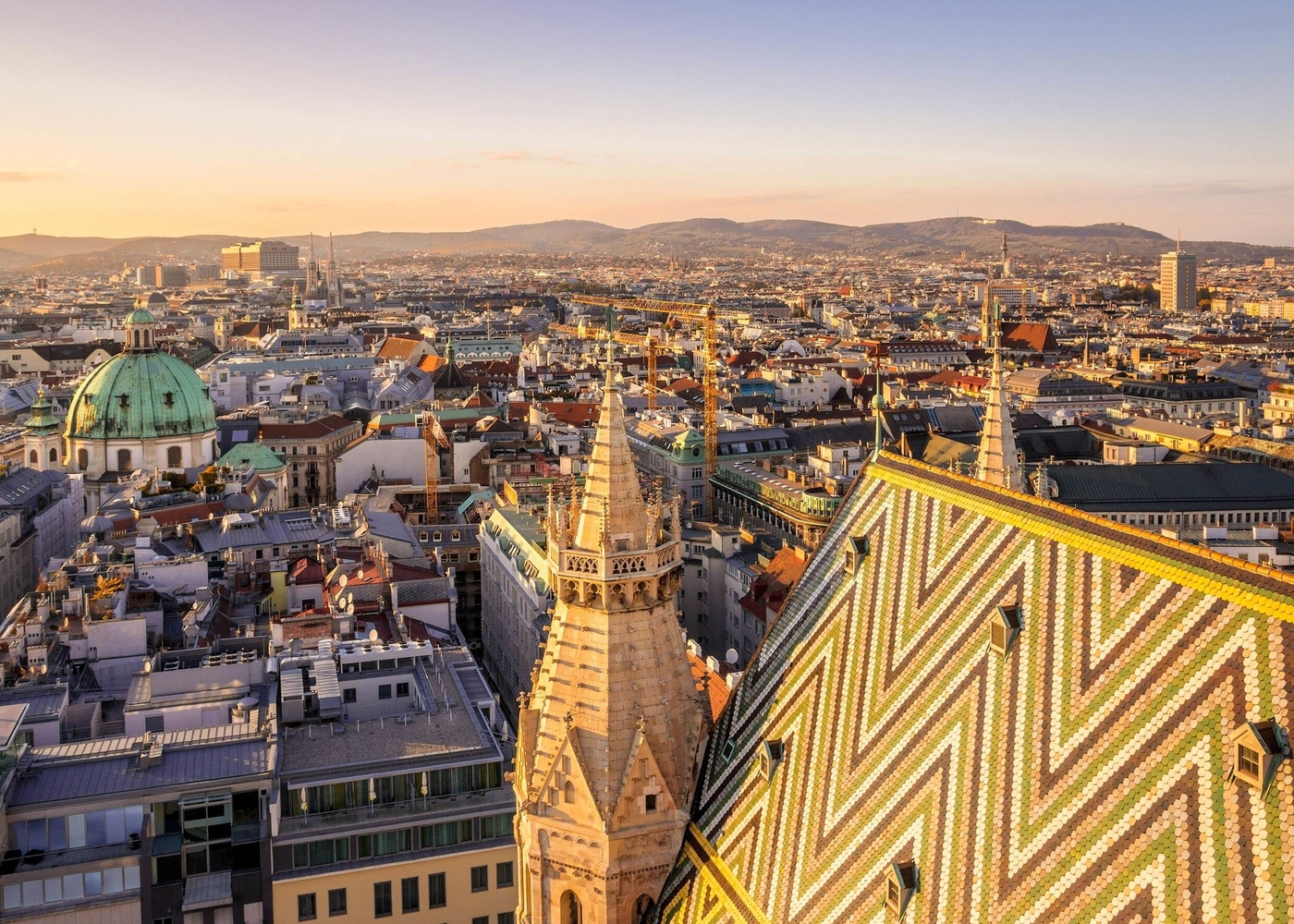 COVID-19 has created unprecedented government actions across the world, one of them being restrictions on hotel bookings and travelling. However, after hotels in some markets were forced to shut down, the news are now evolving to cover the gradual lift of restrictions, for example in Vienna.

Hotel opening statistics throughout the crisis

In Austria, during the crisis, the usage of hotels was highly restricted and only permitted for those already staying at the hotel at the beginning of the lockdown, for business travel, to satisfy the urgent need for housing or for the purpose of those looking after relatives in need. Upon check in a written confirmation of the reason for travel was needed. During the month of April, approximately 30% of hotels in Vienna remained open to satisfy this demand.

Along with the changing restrictions hotels also changed their approach and strategy for a re-opening: while on the 1st of April, 68% of hotels were confidently planning to re-open by May 1st, only 50% were still targeting this date for a re-opening on the 13th of April.

This number decreased further once it became clear that the 1st of May will not be the expected reopening date and on the 27th of April only 33% of hotels were planning to re-open in the next week, a decrease of 35 percentage points from the 1st of April.

The number of hotels planning to re-open on the 15th of May decreased by 28 percentage points after the 29th of May was announced as the by then definitive date for hotels reopening for leisure travel.

At the time of writing, 26% of hotels in Vienna are open. 41% of hotels are planning to open under the current restrictions earlier than the 29th of May, and have open availability for the 15th of May. For the 1st of June, 3 days after the official opening date, 89% of hotels have rooms available to sell.

How are hotels adjusting their rates in April and May?

How have hotels adjusted their rates once the lifting of restrictions became clear? 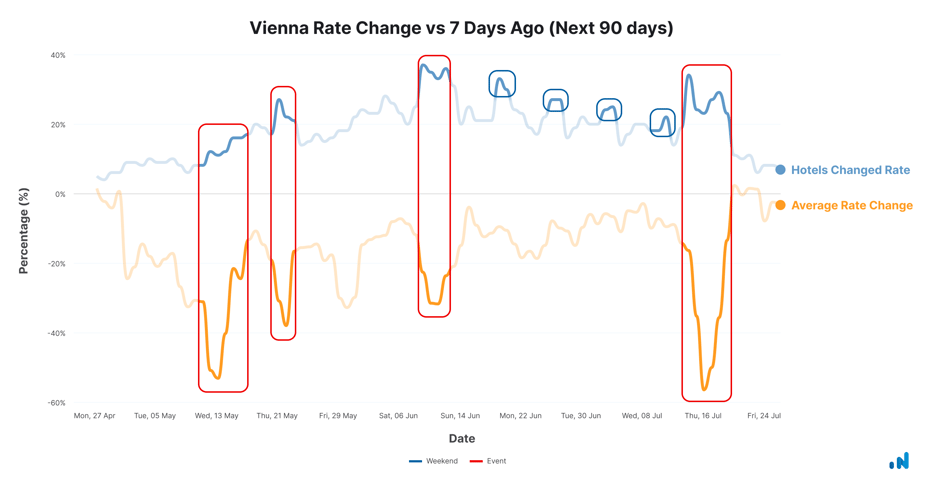 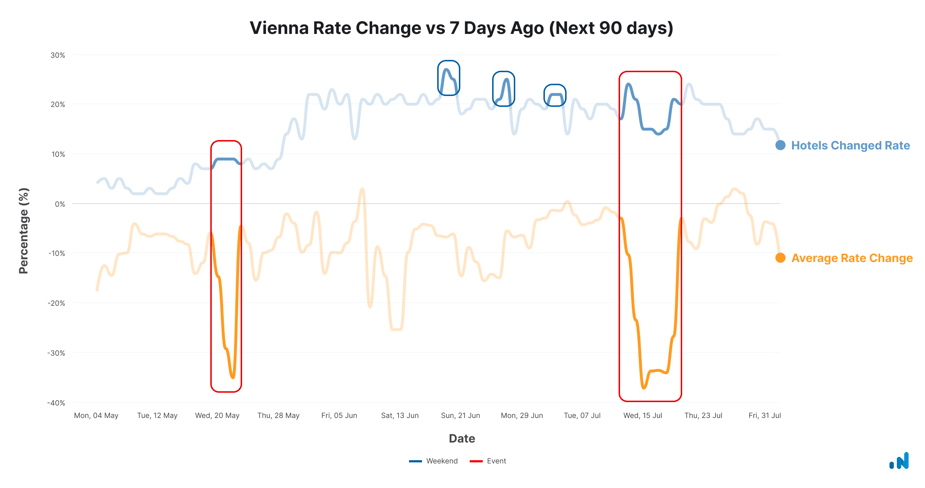 In snapshots of rate adjustments taken on 27th of April and the 4th of May, hotels adjusted overall more days into the future in the April snapshot than in May. For most arrival days in June and July 20% - 25% of hotels are adjusting their rates downwards in the range of -3% to -15%. The strategy seems to be the focus for the month of June with only minimal negative adjustments for the month of July at this point.

Significant negative adjustments noticeable in May appear to be mostly caused by cancelled events, such as the Intertool Vienna, Euro Congress on Psychiatrists and Psychologists and the ESO-WSO Joint Stroke Conference 2020; all were supposed to take place between 12th – 15th of May.

The cancellation of the EFORT Congress and the EUPSA Conference that were planned for the 10th to the 12th and 13th of June caused around 30% of hotels to re-strategise and to adjust their rates downward for these dates by up to 31%.

The most significant negative adjustment however, seems to have been caused by the ‘virtualisation’ of the European Congress of Radiology: the event was expected to take place from the 11th to the 15th of March, was then moved to 15th – 19th of July and finally moved online. This sudden cancellation has led to negative peaks of up to 50%.

During the Ascension Day weekend (21st of May – 24th May), Vienna is a popular city trip destination especially with German tourists who, due to existing travel restrictions, won’t be able to stroll through Vienna this year. This has also impacted rate levels negatively.

Michaela Reitterer, President of the Austrian Hotel Association (ÖHV) is hoping for a large campaign promoting domestic travel this summer in an urge to offset the significant numbers of international arrivals that currently account for up to 75% of Austrian hotel stays.

When considering Vienna as a popular city trip destination, it does indeed seem like hotels are strategising around domestic weekend travel in June and July, with a slightly larger number of hotels adjusting rates for Fridays and Saturdays.

Finally, when evaluating travel demand for Vienna using our Market Insight technology, it becomes clear that while demand levels remain relatively low for the next months (most likely impacted by travel restrictions of source markets), there remains a relatively high demand for hotels in Vienna for September and October.

As historical data is not a reliable indicator for demand and strategy building after the COVID-19 crisis, it will be absolutely crucial to have a reliable source of forward-looking demand data to evaluate developments and optimise revenue as more markets open up.