[Data] How are prices advertised holding up under COVID-19? Part 1/2

When working with hoteliers and revenue managers one of the most frequent requests we encounter is comparing data over time. Any KPI that is measured needs to be put into some kind of context to make it more tangible and provide perspective.

The hospitality industry has greatly suffered during the COVID-19 crisis. There is a clear need to place this into perspective with interesting data visualisation to understand the real impact of the crisis. As an indicator and based on our recent market rate changes data, we can observe how hoteliers and revenue managers’ pricing strategies have evolved in this new environment - specifically across markets, regulations and circumstances they have been forced to adjust to - but what does this mean year over year?

Since the crisis began to the present day, OTA Insight has been tracking these changes: for now rates continue to be adjusted further along into the future, with some short pockets of upwards adjustments in the near term where possible.

However, how inferior have these rates been? Looking at billions of rates to produce this analysis would simply not be possible. Rather, we looked at destinations like New York, London, Dubai, Los Angeles, Sydney, San Francisco, Singapore and Seoul to reveal a snapshot picture of the reality year over year (YoY), same time last year.

Last year hotel availability, measured as the percentage of hotels in a market available to shop, was steadily positive, with periods of short term drops of truly sold-out or length of stay restricted inventory throughout Q1 and Q2 2019. 2020 paints a completely different picture: while the beginning of the year was in line with last year, during the months of March and April, major markets moved to shut down - the long orange curve illustrates a total “close-down” period for many hotels in these markets - for up to three months at the time of writing.

Following the latest news with markets re-opening, most hoteliers are planning to re-open in June and July; tentative dates that have in some cases been pushed further into the future with each update on restrictive measures. Considering hotel availability alongside the average price YoY graph presented further down, it shows signs of confidence as hotel availability as of now is projected to meet last year availability again - competing for “transformed” demand. Any longer term drop off in hotel availability YoY would indicate permanently shut doors and with it permanent change in supply. However hoteliers and revenue managers see positivity through this crisis, and expect summer / winter holidays to help with the recovery, toward the end of the year when their doors are planned to be open. 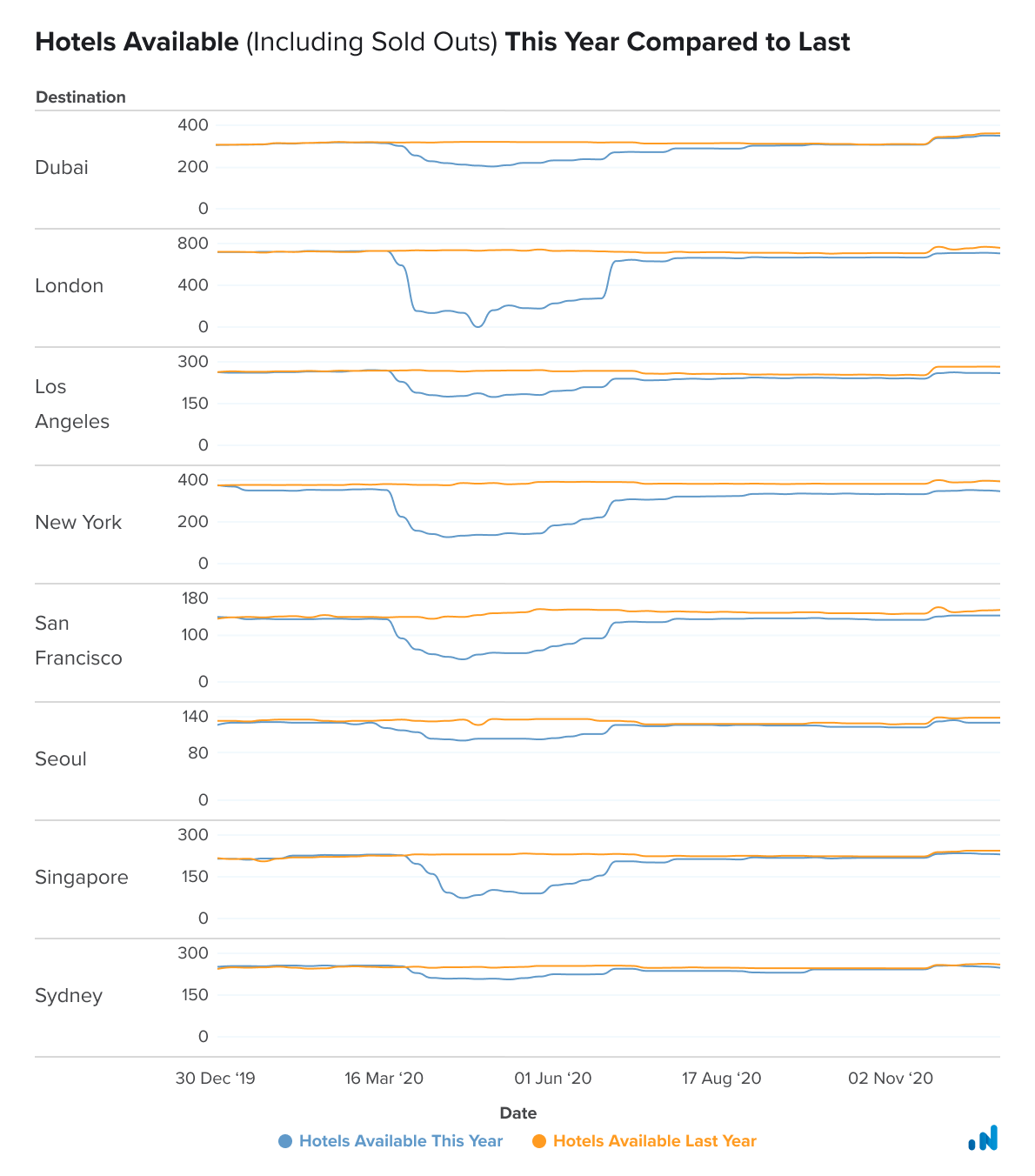 Prices advertised for the rest of 2020: Confidence or perseverance?

Let’s analyse the average advertised price of 2020 and compare it to the same time last year. For most major markets, there is a larger gap for shorter lead times and then depending on the city a trend back to the same levels as last year or just a bit lower. Despite assumptions, it looks like hoteliers and revenue managers have some confidence or at least a strong sense of optimism for the remainder of the year.

The headline news has suggested a potential “return to normal” - whatever that may mean - for July / August across some cities globally, with the expectation that travellers will gradually return. The question is: what type of travellers?

Considering changes that have taken place so far, it appears that these do not affect the second half of the year yet; cities hit harder like New York and San Francisco appear to have taken this into account more pro-actively than other markets, making an exception.

The overall trend not to move BAR rate year over year can be seen as in line with the short and ever evolving news cycle. Or it could be that hotels are still leveraging their rates from last year to price or feed old models for the second half of this year, without much input on the new normal for that timeframe. Certainly this is something to monitor as legacy revenue management principles tend to prove unreliable in this current landscape. 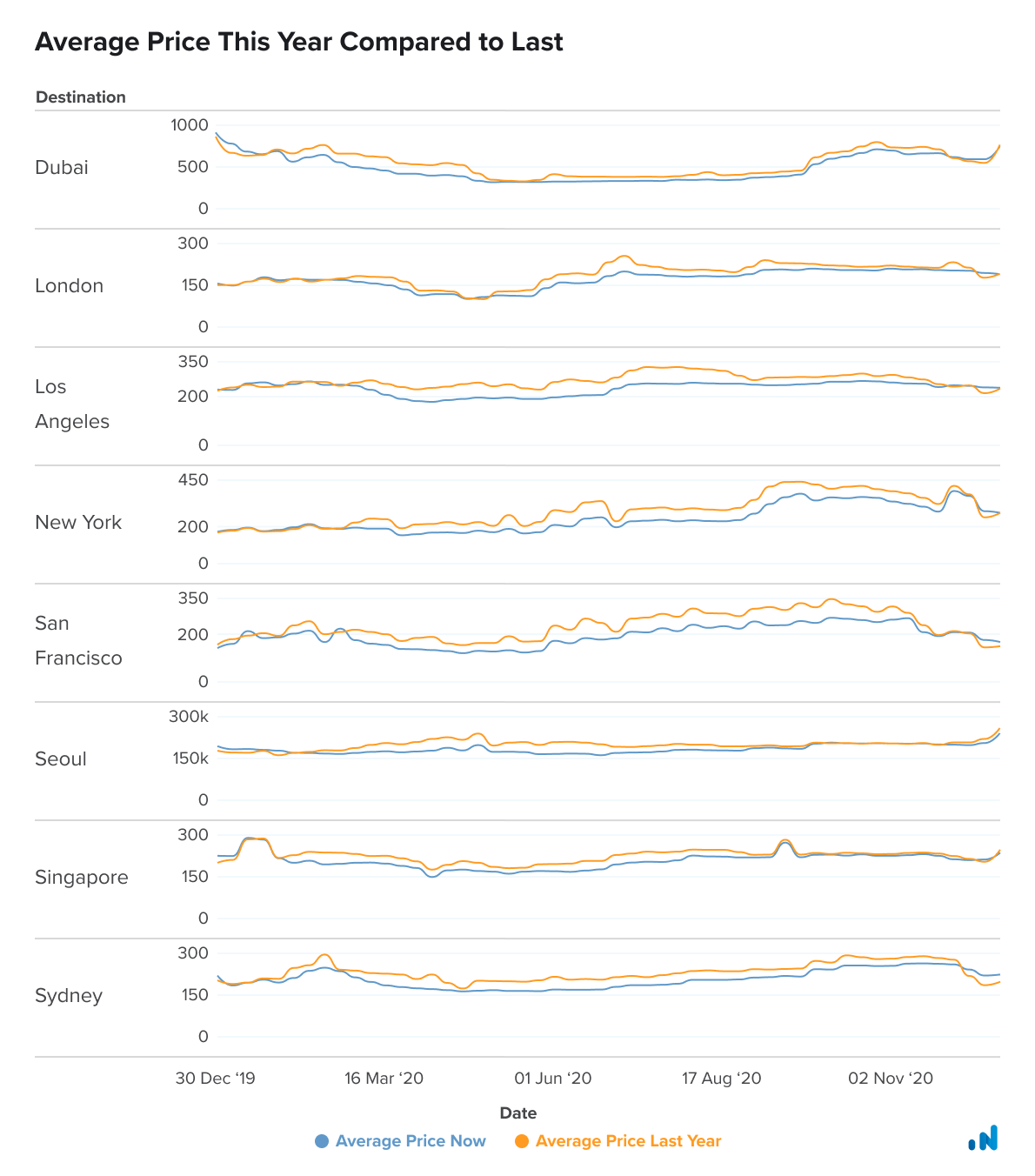 Taking a deeper dive into average rate changes, we can see the relative change of the average price compared to the same time a year before. There are significant differences between cities, making some major markets in the United States potentially more impacted by rate changes than other cities, and much later in the year - that is not to say that they might not adjust those rates upwards again where they can.

The North American hotel market is very different: major markets hotels are generally larger and with greater room counts, they do expect more group bookings / travellers to occupy most of their hotels’ space. Given this was not an option - and won’t be for another six months - for now, rates have drastically decreased. Then there is also a large secondary and drive-by market with an entirely different type of product.

As visible by following the market rate data, many hotels have had to make rate adjustments to respond to rapidly shifting demand.

Adjustments vary, and certain markets are more steep than others, depending on what high demand days or events dropped out. North American cities seem to have been more impacted in terms of rates. This is despite the strong number of hotels which stayed open, or were impacted later as the country lock-down happened in stages and were delayed compared to the rest of the world. In Sydney, we also see deep price changes at the start of May. With very strict restrictions and quarantine programmes in place, their hospitality business has been struggling, outside of government supported hotels near Sydney airport. Dubai still lifted their rates relative to the weeks before and after during Ramadan and all markets shown here, with the exception of Seoul, expect to mark the last days of 2020 with a YoY increase in rates.

But are all hotels markets equally impacted by these changes? (Part II)

The price comparison is based on shopped bookingdotcom rates: final price advertised for Jan 1, 2019 to 31 December 2019 compared to 1 Jan 2020 onwards. Same day of week matching and same store logic applies.

Want to see how Rate Insight can help you make smarter pricing decisions?