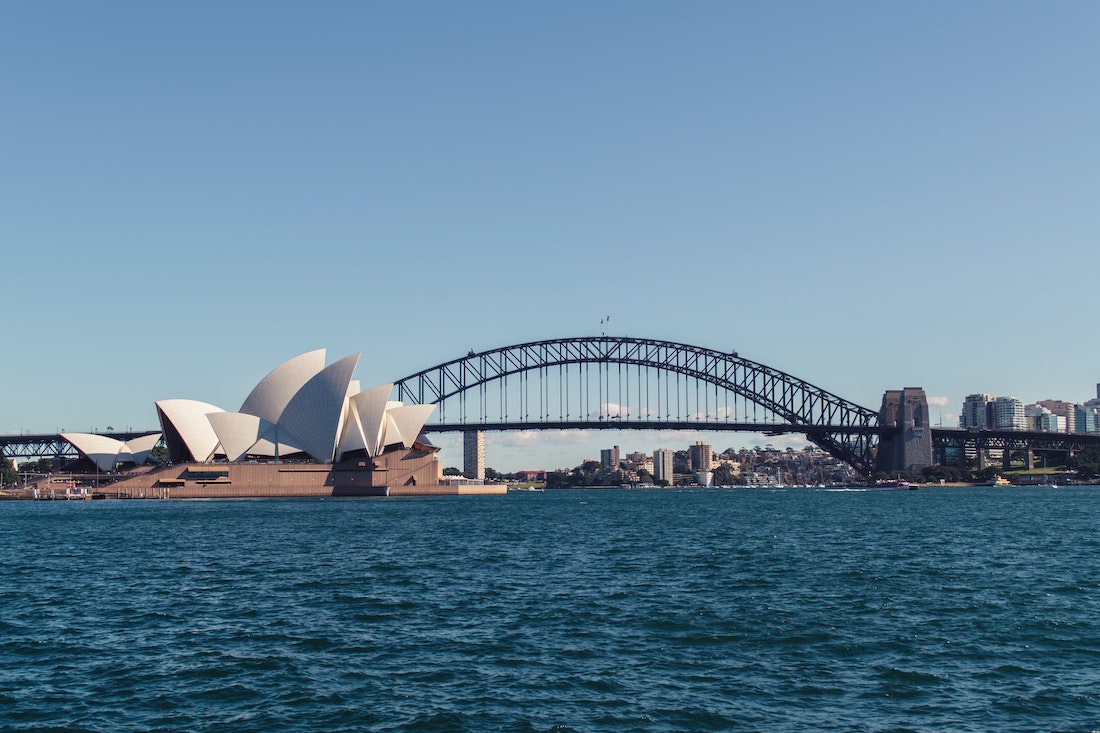 The actions of Australia's and New Zealand’s governments to restrict the spread of COVID-19 were some of the fastest and toughest in the developed world.

Within weeks of clusters spreading, both governments rolled out comprehensive strategies to restrict the virus to an effectively negligible level.

They have, largely, succeeded in this goal, but it has come with a cost. Harsh lockdowns have been repeatedly re-imposed on a federal and state level, depending on the infection rate.

This has created considerable issues for the hospitality sector in both countries, resulting in new strategic direction by hotel revenue management teams. We now see a proportionally much higher rate of flexible rate strategies in the space, with restrictions being the biggest cause of these changes.

A response in rates

It didn’t take long to see a response in the hospitality markets of both countries following the initial outbreaks of COVID-19.

The integration of both countries’ economies into the Asia-Pacific region, careful monitoring of initial outbreaks and the decision to pursue ‘zero-COVID’ strategies in both cases, meant that governments quickly became aware of the extent of the pandemic and took strategies to mitigate it.

Looking at New Zealand’s response in the second half of March 2020, the government announced quarantines, then closed borders, and finally ordered a stringent lockdown, all before the first COVID-19-related death occurred within its borders.

Australia followed a similar path, quickly creating a response commission and sealing borders before a lockdown was announced in late March 2020. 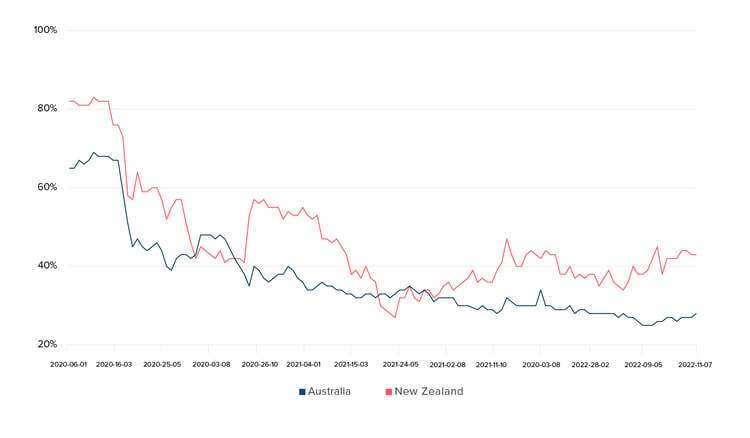 This is why we see a sudden and defining change in rate strategy during this month, with the steepest declines in the proportion of hotels in the countries offering non-refundable rates occurring in March.

Overall, there is then a general downward trend until 2022, where stabilisation now appears to have occurred and, in the case of New Zealand, a trend of upward recovery now appears to be emerging.

In both instances, hotels found themselves reacting to government decisions, cutting the number of rooms with non-refundable policies attached to try and give some confidence to those booking and to attract business in dire circumstances.

We can see similarities in both cases. Once restrictions are eased in Australia in June 2020 onwards, hotels attempt to reintroduce more non-refundable policies. The same occurs in New Zealand in September-October 2020 as the government moves down its response tiers and allows more travel internally and externally.

There is some divergence from mid-2021 onwards. New Zealand largely experiences short, and occasionally sharp, lockdowns from this point on. On the other hand, Australian territories repeatedly impose harsh restrictions during the country’s third wave.

This results in more confidence on the part of New Zealand hoteliers to put in place non-refundable rates.

This gap subsequently widens, meaning that although the trendlines are very similar between the two countries, underlining the similarity of overall government policy across both, there is a 15-point difference in the share of properties with these room rates available at the end of our dataset (28% versus 43%). 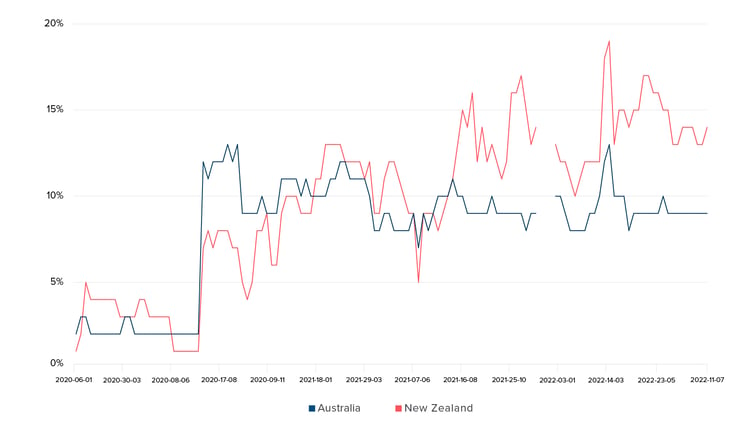 We can also see the effects of the pandemic response in the percentage of semi-flexible rates put to market post-pandemic.

These were near negligible in the initial period of early 2020, before the true scale of COVID-19 became evident. In Australia just 2% of hotels offered these policies and 1% in New Zealand.

While this represents a relatively small proportion of overall room rates, it is still a substantial shift. In the case of New Zealand, the trend for more flexible rates has continued across the entire period.

There are also fluctuations at similar points in the timeline where hotels are responding to, or anticipating, COVID-19 measures and spread, as well the policies of their peers.

Easing restrictions in mid-2022 caused less semi-flexible rates to be put out to the market, before climbing back as restrictions were reintroduced shortly after.

This came with restrictive policies initially, before transitioning in February to a more open policy of living with the virus.

The dramatic swing in official policy explains why this spike in semi-flex rates is so sharp, as revenue managers rapidly respond in anticipation of further lockdowns, before pulling back as the situation clarifies and is far less severe for the hospitality market than feared.

Ripples in rates due to state restrictions

We can observe further evidence of how and why restrictions have impacted hotels by looking at local hospitality markets. In Australia, state governments often decide the level and nature of precautions, most noticeably forbidding interstate travel, creating correlations and divergence. 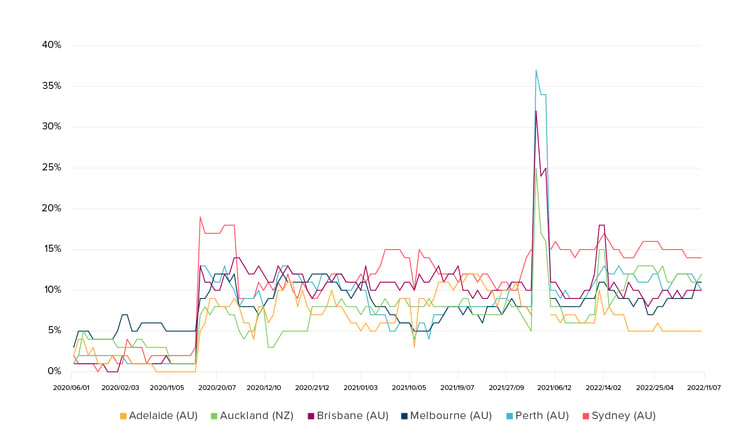 Moving forward to 2021, divergence develops as federal response is moved to the state level, for the most part. Sydney, as part of New South Wales, was subject to very harsh and long lockdowns, however Victoria and South Australia governments tended to move to short ‘circuit breaker’ lockdowns and less restrictive measures.

This helps to explain why there is divergence in semi-flex rates between Adelaide and Melbourne on the one hand, and Sydney on the other, as the dataset progresses.

Where do we stand now?

As of the point of extraction in August 2022, travel demand has returned on a global level and although the virus threatens from the margins, it is no longer the biggest central issue in tourism.

An improvement in outlook will shift the mix of flexible policies in the marketplace, as has been the case in our data so far. 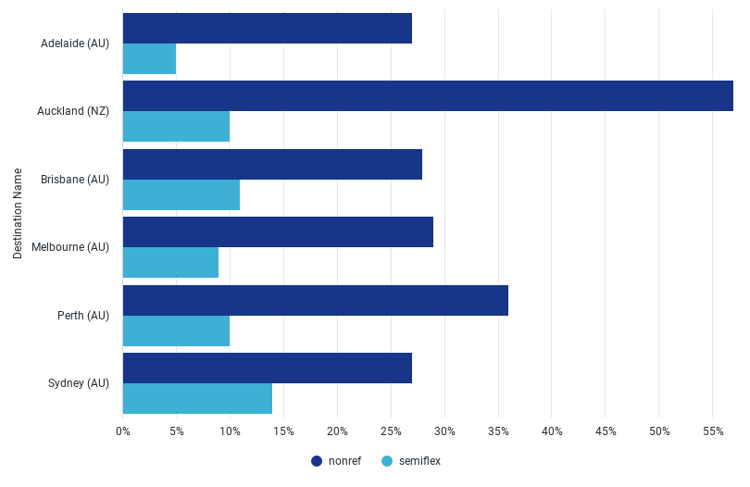 Nonetheless, non-refundable policies remain the minority in all major cities in Oceania bar one - a far cry from pre-pandemic.

Leading the pack in this field is Auckland, where 57% of properties offer non-refundable policies – a share that has been climbing steadily.

Adelaide and Sydney have the most flexible policies at the point of writing, with 73% of hotels in both cases not offering any form of non-refundable room and 5% and 14% having semi-flexible policies in place, respectively.

The variability shows that even though both countries share much, including a very similar response overall to COVID-19, individual markets continue to experience variation and those gaps are likely to widen going forward.

To discuss these trends further and other key data points impacting the APAC region, please visit us at NoVacancy in Sydney by booking a meeting through the link below.

The share of hotels in Australia and New Zealand offering non-refundable rooms has halved since the start of 2020 and the percentage creating semi-flexible rates has jumped noticeably over the period.

Much like other regions studied in this report series, this appears to be a long-term trend, which may be starting to shift, but if it is, it will take many years to go back to pre-pandemic rate strategies.

Hoteliers need to adapt to this reality and be capable of changing pricing tactics depending on market conditions, demand and competitor policies.

Outside influences are critical in dictating what rate policies are enacted. With inflation now rising rapidly and market conditions still very uncertain, being able to rapidly change your strategy based on what is actually happening in your area  is a key competitive advantage.

This is why hoteliers need both advanced rate intelligence, as well as forward looking demand data to inform their decisions and rate strategy. Armed with this data intellgence, hoteliers can more confidently holding rates or introduce more flexibility, at the right time.