Hotel rate strategy evolution across North America in reaction to the pandemic: Part 1 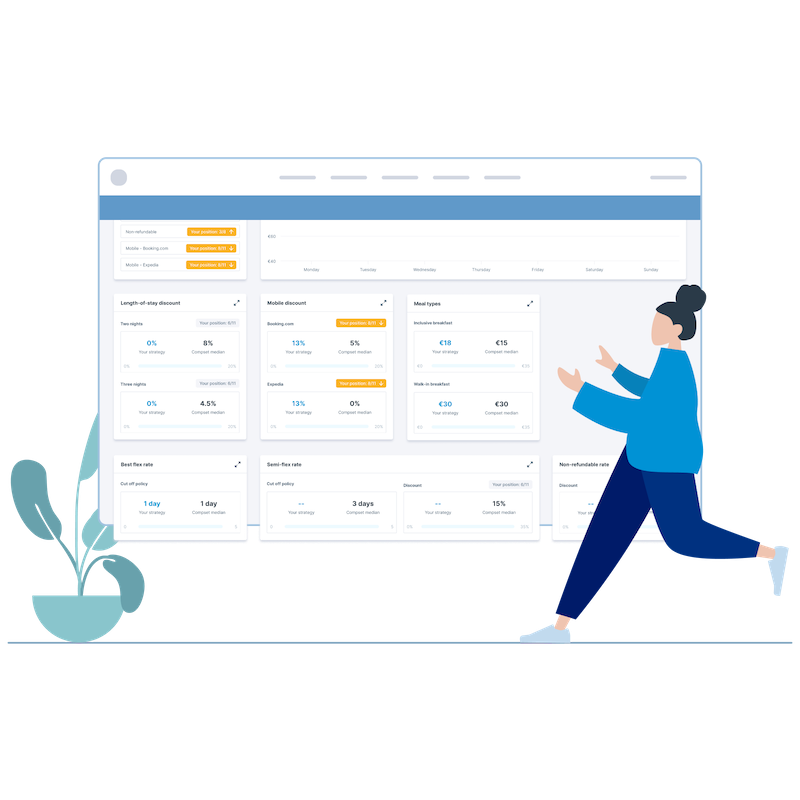 The pandemic has been a rollercoaster for the travel and hospitality industry. The huge fluctuations in demand which disappeared and returned almost at the flick of a switch, depending on restrictions, created the conditions for an extreme black swan event. In response, hoteliers have had to look at every potential lever they can pull to try and keep their properties afloat during the troughs and capitalise as much as possible when demand returns.

There is now a significant change going on in the market in terms of cancellation policies offered by accommodation providers. For the foreseeable future, flexible rates are on the rise, whereas non-refundable rates have been cut. In this post we leverage the new Rate Strategy feature available within Rate Insight (enterprise subscription) to break down critical rate patterns in North America and how you should adapt to these trends.

Long-term travel planning became almost impossible in 2020. Core to the emerging dynamics in the hospitality sector is how the pandemic has shifted the priority placed on flexibility - by both consumers and the overall industry. Stay-at-home orders and international travel restrictions came and went with different levels of severity, often lacking clarity and frequently with little time for travellers to adjust.

This created a need for more room flexibility for consumers. This has been met by the hoteliers and the online travel industry. The latter enhanced search terms for flexible rates, prioritising properties that offer these policies in results, while the latter have created semi-flexible rates for more of their inventory and reduced the prevalence of non-refundable rooms. Although the disruption has reduced in scale and severity in 2021, it remains very much present, this has led to these trends sticking and the rate of hotels offering flexible rates remains elevated, while fewer are offering non-refundable rates than pre-pandemic.

A reckoning for rates

The extreme situation of 2020 and 2021 is clearly reflected in the data for hotel rate strategies in North America. As the pandemic broke on the continent and rose to become a crisis that created economic and social consequences, there was a huge reaction when it came to rate strategy. 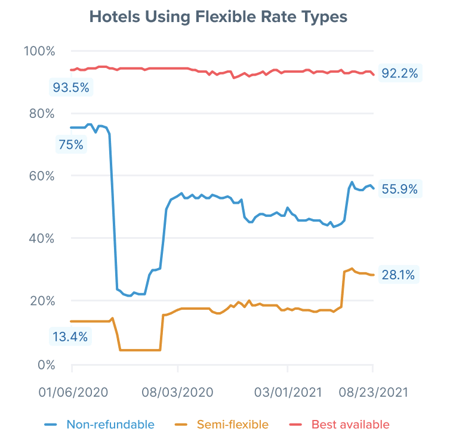 In March 2020, the WHO announced that there was officially a pandemic, with the Trump administration following on in mid-March by declaring a national emergency. Shortly after came travel bans, statewide stay-at-home orders and the closure of the US-Canadian border. The effect of this was devastating for the hospitality industry and is shown at the most extreme point in our data, as the percentage of hotels offering non-refundable rates plummeted by more than 50 points between the start of the year and May 2020. At the same time hoteliers also clamped down on semi-flexible rates. However, as hope of market openings returned, the prevalence of non-refundable and semi-flex rates surged, with the latter jumping by nearly a factor 7x.

This boost was likely driven by consumer demand for these policies, but also competitor behaviour and changes to OTA and metasearch results to highlight flexibility. Google, Booking.com and Expedia all moved to make flexibility more prominent in their search criteria in the first quarter of 2020.

As the year progressed, there were dips when infection rates spiked. However, it appears that these changes are here to stay as non-refundable rates were still 20 points less common when this data was pulled, but semi-flex prevalence has doubled across the Summer 2021 peak period.

Looking at the US and Canada side-by-side, we can see that, in general, hoteliers in both countries have reacted in broadly similar ways and at similar points, but there has been divergence as we move further into 2021.

US hoteliers have been more proactive during the pandemic, introducing semi-flexible rates in more cases after initial lockdowns and also distributing more non-refundable rates heading into the peak season of 2021. The US is seeing double the percentage of hotels offering semi-flex rates at the end of our dataset compared to Canada (29.1% versus 14.8%) and has returned to more than half putting out non-refundable rates. 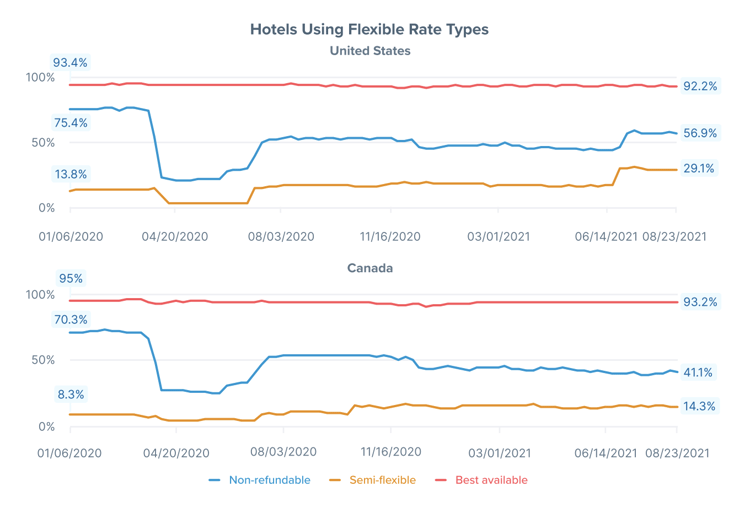 This may reflect the looser restrictions in the US and the greater amount of internal demand that has returned in the country’s travel market relative to Canada. In the latter, their government’s more cautious approach to the virus is likely to continue to dampen demand and reduce the ability of the hospitality industry to reintroduce non-refundable rates.

Divergence increases further when breaking down markets into more geographic detail, with many regional markets seeing flexible policies being removed or introduced at substantially different levels across North America. Using Rate Strategy we extracted datasets for major markets across North America. These show a 25-point difference between the markets, with the highest prevalence of semi-flexible rates available compared to the lowest.

The degree of change over the course of the last year and a half within individual markets shows wide variation. Looking at markets that have experienced the most change, there is a more than 40% difference between the lowest trough and highest peak in the period measured. Columbus, Ohio had a nearly 50% difference from the highest to the lowest point, and Fort Worth, Jacksonville, Louisville and Tulsa all experienced changes of over 40%. On the other end of the scale Miami Beach and San Francisco saw variation of just 11-12% across the period measured.

Largely markets that saw the least variation started from relatively low bases, whereas the opposite is true for those with the highest. This is indicative of the demand and clientele of hotels in these locations, with Miami beach hotels maintaining strong occupancy during the pandemic, for example. It likely indicates a multiplier or domino effect within individual or interlinked markets, where sudden changes by a competitive set under pressure to introduce these rates causes their rivals to follow.

Virtually all of these markets have seen sudden changes in the prevalence of semi-flex rates: at the start of the pandemic, when cases initially decreased in the Summer of 2020, when COVID began to return in October and then rising again as we moved into summer 2021. This shows that there is a wider trend at play: hotels are largely reacting to these adverse events in the same way when it comes to flexible policies. It is also worth noting that nowhere in the analysed markets did we see semi-flex rates returning to below pre-pandemic levels, reinforcing their increased importance in the hospitality ecosystem.

Looking at the top five metro areas in the US – Chicago, Dallas/Fort Worth, Houston, Los Angeles and New York, we can observe high levels of variation.

Although these markets appear to show the same troughs and peaks, the depths of these changes are markedly different. While they broadly end up with twice as many hotels offering flexible rates than at the start of the period in each case, there is considerable difference in the share of hotels doing so.

For example, Los Angeles and New York start with fewer hotels offering semi-flex rates and have less variation over the period measured, before ending up 10 to 15 points lower than the other markets. By comparison, Dallas/Fort Worth shows much more extreme peaks and troughs.

Overall, more unites these cities than divides them, as diverse, economically strong, regional powerhouses that have large hospitality markets. Each market needs to be considered in its own context - you need comparable data from competitors in near real time to build a comprehensive rate strategy that matches on-the-ground conditions.

With all markets measured showing that semi-flex rates are above their pre-pandemic levels, the rise in the share of hotels offering semi-flex is a widespread trend. The overall prevalence of semi-flexible rates is more than double what it was in January 2021 and they are poised to become a key part of the set of offers hoteliers need to consider in the medium term at least.

Although non-refundable rates have made a return in the US market, they are not yet back to pre-pandemic levels. It remains to be seen whether they will ever return to 2019 levels, but hotels need to be prepared for the increased flexibility expected by travellers in the pandemic period to become a permanent reality.

Hoteliers need to have a clear oversight of what is driving their markets and how they are changing over time. This is especially so, post-pandemic outbreak where we can see in the data that the biggest changes came as a result of critical junctures in the spread of the virus and state and federal responses to these crises.

Advanced rate intelligence can address this situation. It can help make clear what approach needs to be taken and how you can protect your hospitality business by holding rates or introducing more flexibility at the right time.