The start of a travel comeback in the United States: a spotlight on 4 key destination markets 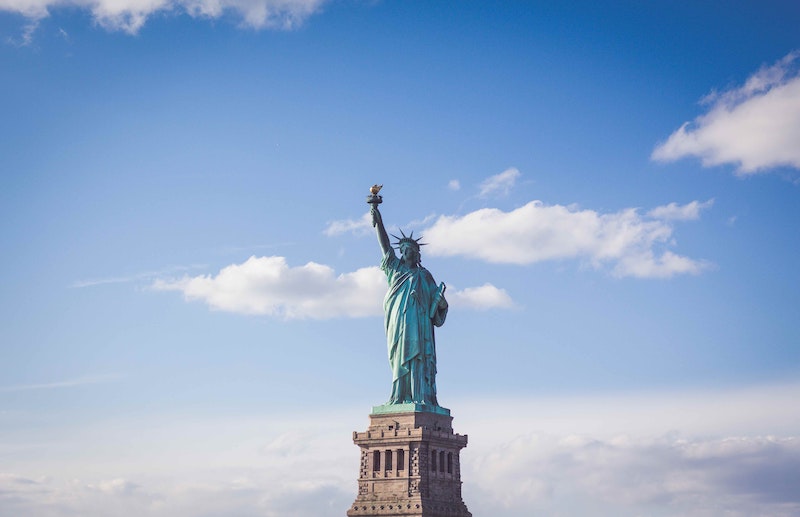 After over a year of government restrictions in the United States (U.S.), vaccination rates have accelerated, and the nation is on the verge of a travel boom. According to the Centers of Disease Control and Prevention, as of April 12, almost 121 million people in the U.S. had been given one dose of a Covid-19 vaccine and of those, more than 74 million have had the two full vaccinations.

In total, 22% of the population are now fully vaccinated and traveller confidence is returning apace. So much so, there are now concerns over labour shortages in the travel and hospitality sectors – a problem which would have been inconceivable, even at the start of this year.

In this article, first we look at search data from the states of Texas and Florida, and several cities within each state. We then examine search data from the cities of Indiana, Indianapolis and San Antonio, Texas; hosts of the men's and women's NCAA March Madness basketball tournaments.

A new approach for hoteliers

On Friday 12 March, the Transportation Security Administration screened more travellers through U.S. airports than any day since the start of the pandemic in March 2020. Although not yet back to pre-pandemic levels, for this time of year U.S. air travel is now taking flight.

It’s an altogether positive sign for hoteliers in the U.S. market and a further indication that recovery is now well under way in the industry and a major uptick in demand is likely to arrive this summer.

Demand is returning to a world in which historical trends and consumers booking patterns have been largely made redundant. It is now vital that hoteliers understand new booking behaviour through buyer intent and forward-looking data points, to capture market share and prosper in recovery, where government restrictions and traveller booking behaviour both change rapidly.

To give a more in-depth picture of the travel activity taking place in the U.S., we’ve examined the datasets of four key markets from February to April with Market Insight, the industry's first market intelligence tool that provides real-time views on demand, based on the most recent aggregation of data points including: GDS, OTA and meta search, flight and hotel searches by consumers, alternative lodging options, and public holidays and events.

With Market Insight hoteliers can now accurately forecast demand for reservations based on consumer search behaviour and price competitively based on actionable insights.

The week of February 14-20 brought a winter storm rarely seen in Texas. Storm Uri engulfed the state in record setting low temperatures. Due to the sub-zero conditions and subsequent surge in energy use, the state’s power grid started to fail, which left at least 4.5 million electricity customers in Texas without power.

As a result, the week of February 14-20 saw hotel occupancy reach a 50-week high in the state, at 56.3%, and understandably all of these bookings came with a very short lead time. Occupancy levels also grew 9.4% over the previous week, the largest week-over-week occupancy increase for the state in the last year. 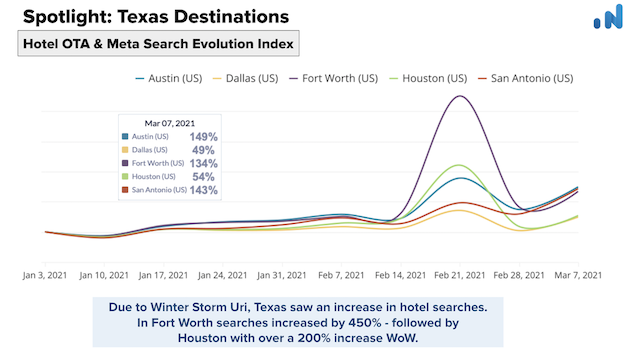 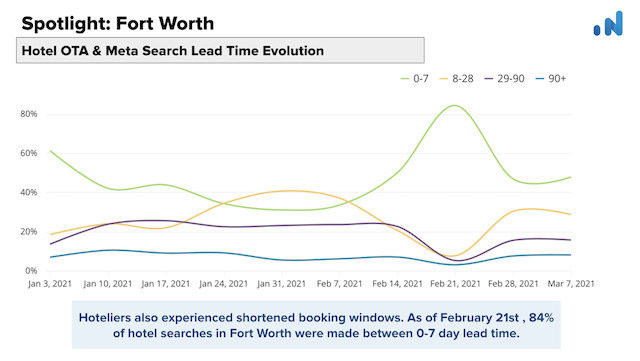 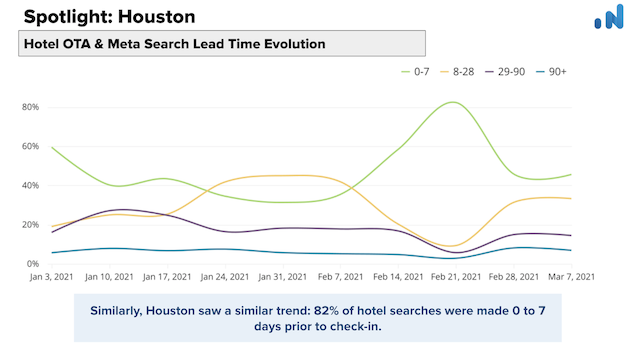 In March, Texas Governor Greg Abbott issued an Executive Order on March 2 which ended the state-wide mask mandate on March 10, whereby no legal jurisdiction would be able to enforce the wearing of masks in public.

Following the announcement, demand started to pick up across the state and presented an opportunity for hoteliers who were quick to act on this trend. This was evident for the popular Spring Break destination of San Antonio, which saw a 77% rise in flight searches, and a large increase in hotel OTA and meta search, particularly for 8-28 day and 0-7 day booking windows. 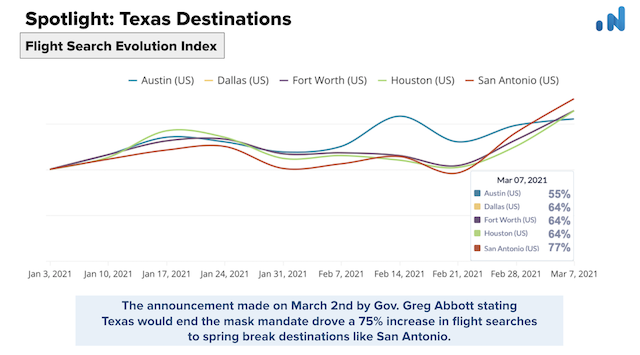 Austin, on the other hand, saw an increase in searches for closer to the summer period. The concrete plans set out by Governor Abbott to ease covid restrictions, meant consumers were able to plan their vacation further in advance, with demand peaking on Memorial Day weekend. Hoteliers that leverage  a market intelligence solution that is able to correctly predict spikes in demand like this - as well as source of demand -  are better positioned to capture more consumers by offering targeted promotions and offers. 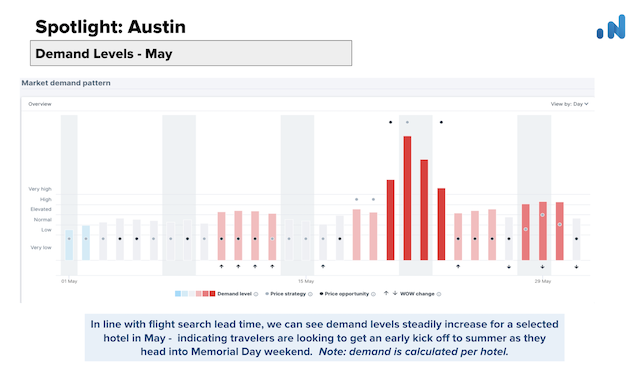 Florida is one of America’s most popular winter sun destinations. With pleasant temperatures, sunny beaches and an array of entertainment options, the state is very attractive for holiday makers. This is especially true over the Spring Break period, which runs from late February through to mid-April, peaking in mid-March.

Although recent traveller numbers to Florida didn’t return to 2019 levels, there are encouraging signs for hoteliers. The state posted high occupancy rates even in January, with popular destinations such as Miami and Tampa almost reaching 55% occupancy. Florida maintained no state-wide travel restrictions from the beginning of 2021 onward and consequently saw demand increase into Spring Break. 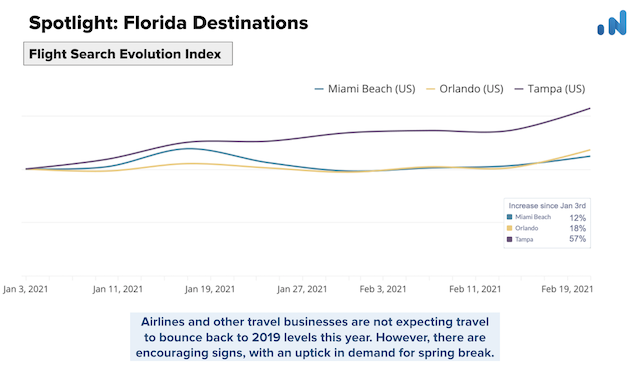 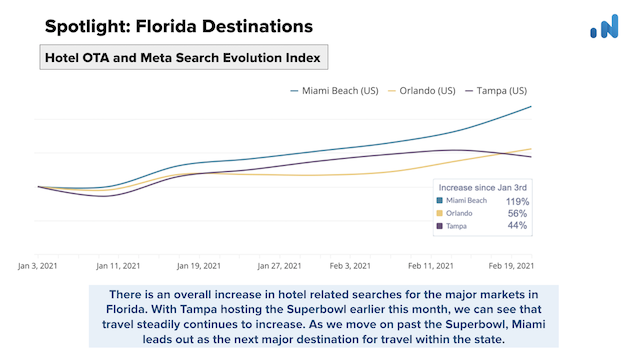 Tampa Bay hosted the Superbowl on February 7,  flight search and hotel OTA and meta search volume for the destination grew. As the Superbowl passed and the Spring Break period came closer, demand for Miami Beach increased dramatically. This demand continued throughout March into the first half of April, and with over 61% of searches looking at a length-of-stay of 4 nights and above, this presented an opportunity to target extended stay guests. 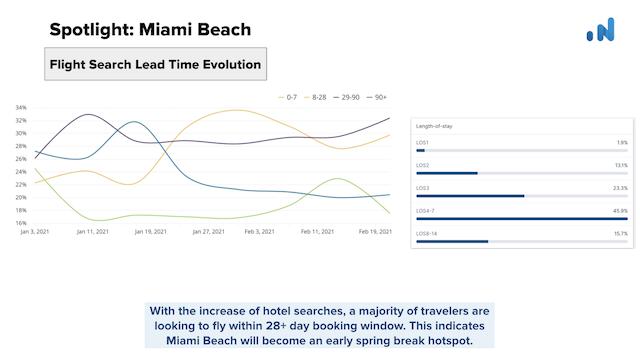 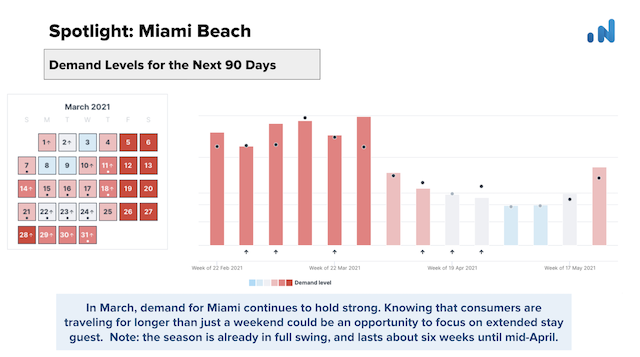 Orlando followed a similar trend to Miami, but with a later booking window shift for travellers, resulting in demand picking-up into the latter half of Spring Break - which as a family destination corresponds to the U.S. school holidays of early April, opposed to the college breaks which dominate the month of March. 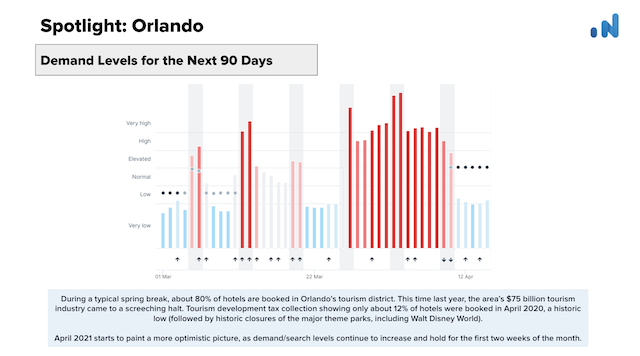 As OTA and meta search for Orlando progressed through the month of March, the majority of would-be travellers were intending to travel 30-90+ days in advance and over 46% of these were searching for a length-of-stay of 4 to 7 days. This displays that traveller confidence is returning, in tandem with the acceleration of the vaccine rollout. 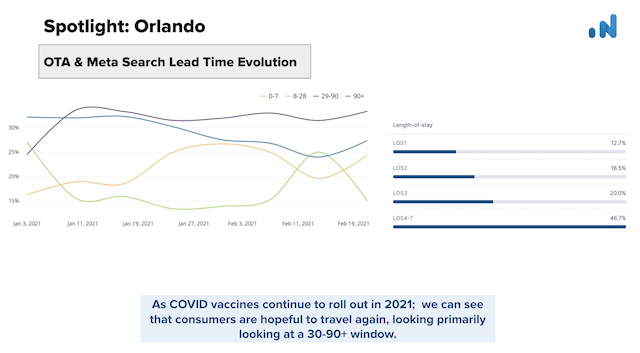 As vaccines continue to triumph against Covid-19, positive trends like this should follow suit. Hotels that are able to forecast demand  with forward looking data will continue to prosper by accurately targeting the buying intent of travellers.

In March 2020, just weeks before the National Collegiate Athletic Association (NCAA) men's and women's basketball tournament was set to begin, Covid-19 swept the nation, and the tournament was cancelled. A year later, the tournament was given the green light and set to take place in Indianapolis, Indiana(men's) and San Antonio, Texas (women's).

On January 4, 2021 the NCAA announced that the much-anticipated March Madness basketball tournament would proceed, with all 67 men’s games taking place in Indiana – the majority of which being played in Indianapolis. Following this announcement there was an uptick in flight searches throughout mid-January of about 130% and a further increase closer to the tournament commencing in February. 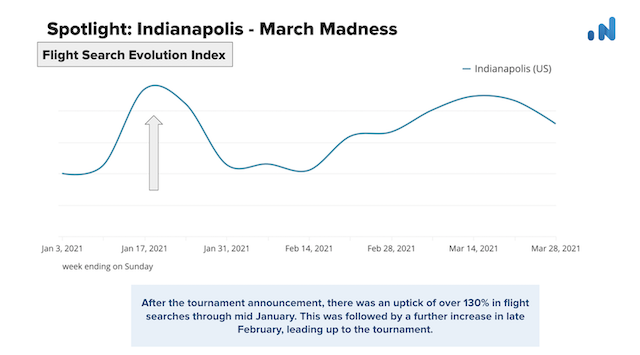 Similar surges in flight and hotel searches can be seen in the San Antonio market, where the women's March Madness tournament took place. Searches for San Antonio picked up significantly through mid-February, increasing 159% from January 1 until March 28, while hotel searches also saw a 350% increase from the beginning of January through mid-March. 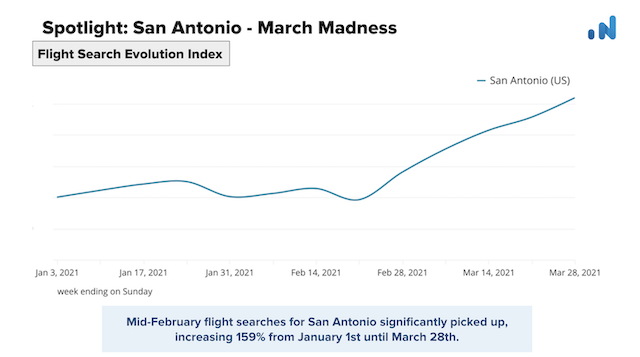 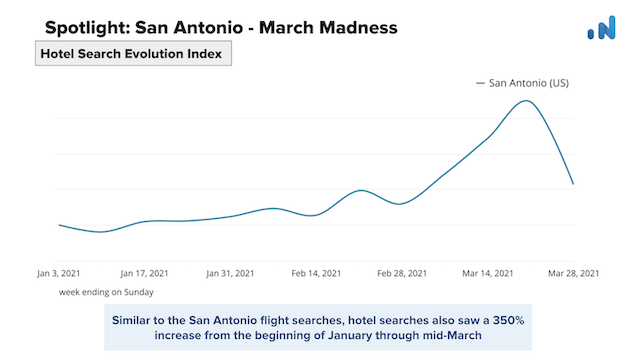 On February 19th, 2021 the NCAA announced they would allow fans at a 25% capacity for the men's tournament and 17% for the women’s tournament. This resulted in a second wave of flight and hotel searches take place for the tournament. 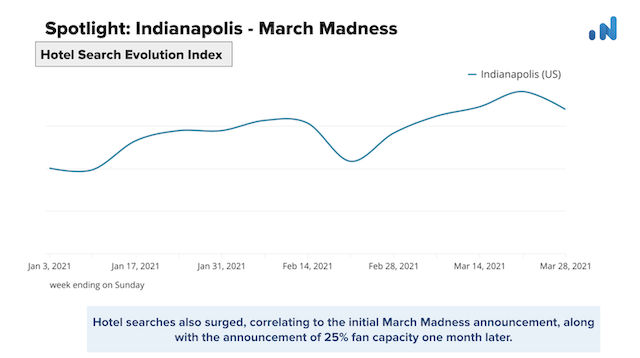 U.S. travel is returning - both hotel and flight searches show increases week over week. Traveller confidence continues to gain momentum as well: consumers are now looking at trips with a longer booking window and with a longer length of stay, indicating there is less worry around cancellations.

U.S. destinations like Orlando, Florida and Austin, Texas are now seeing improved summer demand. With the right business intelligence solutions in place to spot this demand and where it is coming from, hoteliers can take action before their competition.

As is clear in the markets we've analysed, historical data is no longer as effective an indicator of current market conditions for revenue managers and hoteliers. It’s crucial to drive targeted, location-specific initiatives as demand shifts in real-time, to increase revenue opportunities and be poised to capture as much market share as possible in the travel comeback.

Ready to uncover new revenue opportunities? Discover all of the benefits of Market Insight now!