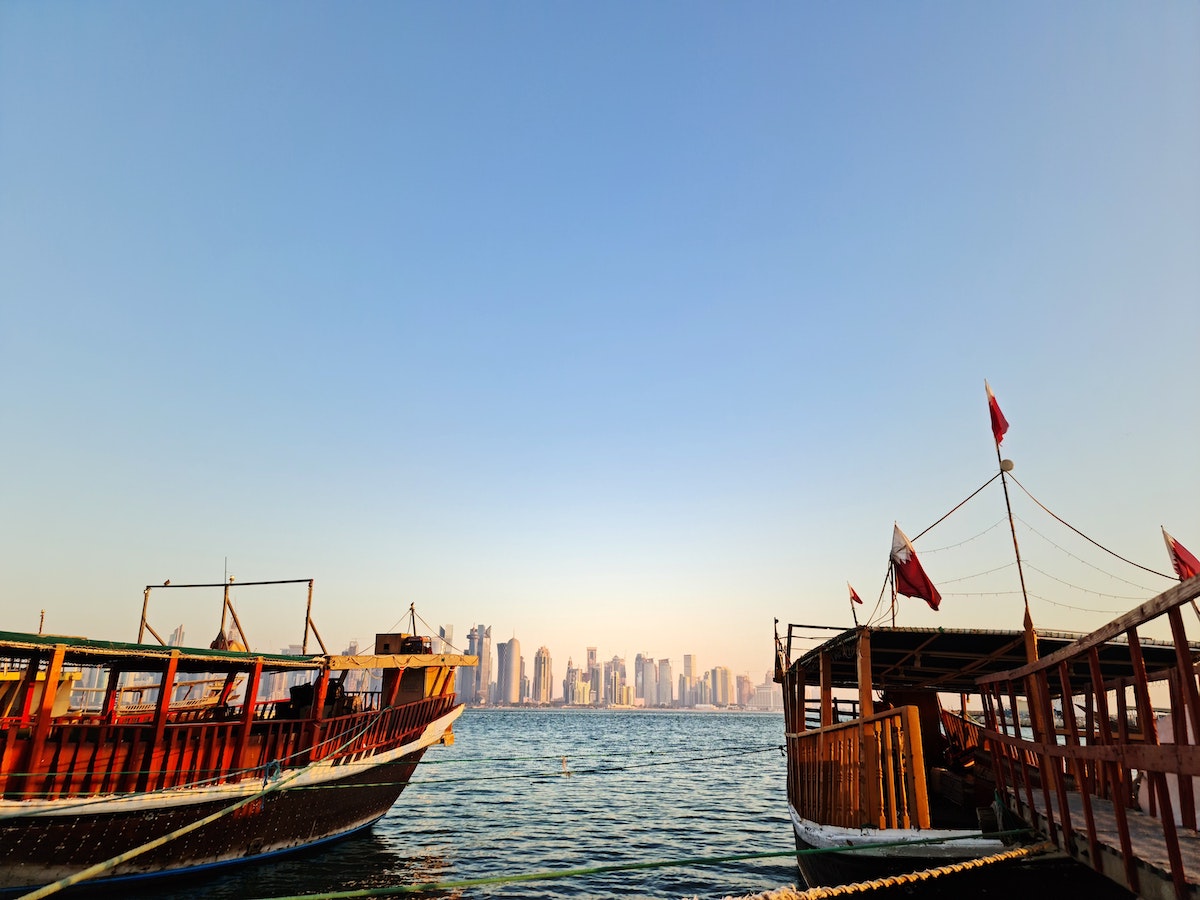 Qatar 2022 is a World Cup of firsts. Fans are experiencing both the first winter world cup and the first tournament in the Middle East. A world of firsts also comes with uncertainties.

The question that was on many football pundits’ minds was will a winter world cup work? While we can’t say yes or no to the sporting side of that question, we can take a deep dive into the regional accommodation market to see how demand and pricing have shaped up for the 2022 FIFA World Cup and what lessons you can take when strategising around major events in your own market.

The biggest of tourism booms for Qatar this winter

Prior to the tournament period, it had been a relatively lacklustre year for Qatari tourism, with monthly international arrivals rarely squeaking past 2019 levels. Unsurprisingly this all changed when the World Cup arrived.

For comparison, while other nearby regional cities are also now outperforming 2019 pricing levels, and appear to be enjoying some degree of spillover demand, the rate of change pales in comparison. Prices in Manama, Bahrain, are up 38% in December 2022 compared to the same month in 2019, while they are up 45% in Dubai and 53% in Abu Dhabi. 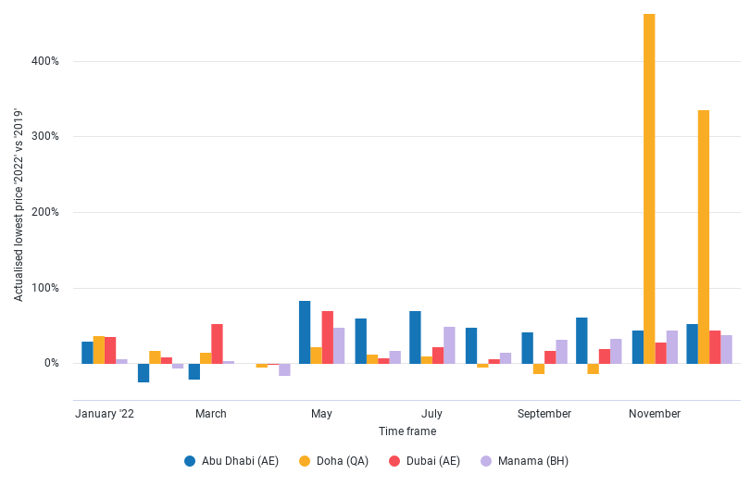 The monthly rise for Doha doesn’t show the full impact, however, with pricing per week demonstrating just how much the tournament is pulling room rates upwards in Qatar. Looking at room rates across all hotels in Doha, they typically sit somewhere between $120 and $150 on average across the course of 2022, a level they have largely been around over the last three years.

Then as the World Cup starts, prices in Doha peak during the opening week of the tournament, at $1,312. A more than tenfold increase on the normal rates being sought. 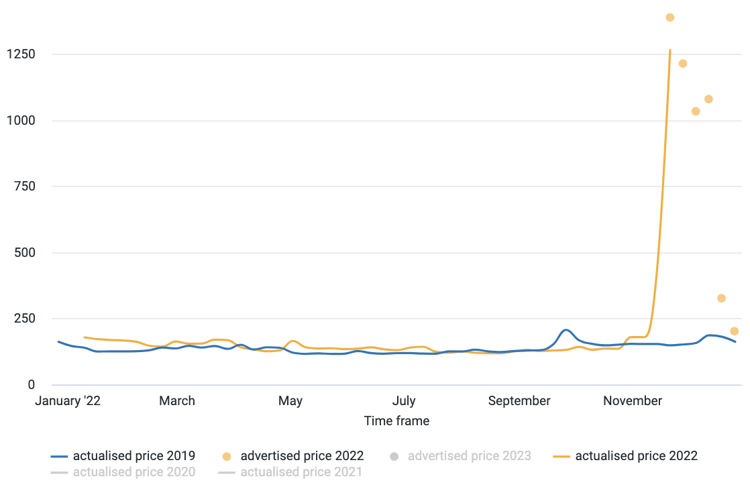 There is a relatively small geographic area within which travellers can stay for this year’s tournament, but it is also concentrated when it comes to the types of accommodation on offer - with the higher end of the market providing an oversize share of available rooms compared to other major cities.

According to Qatar Tourism statistics on room types in the country’s accommodation market, a remarkable 48% of all rooms are for 5-star hotels and 25% are for apartments classified as ‘deluxe’.

Although the 1 and 2-star segment is listed as the fastest growing within their stats, as construction ramps up pre-tournament, this still only accounts for 1% of the market space by comparison. 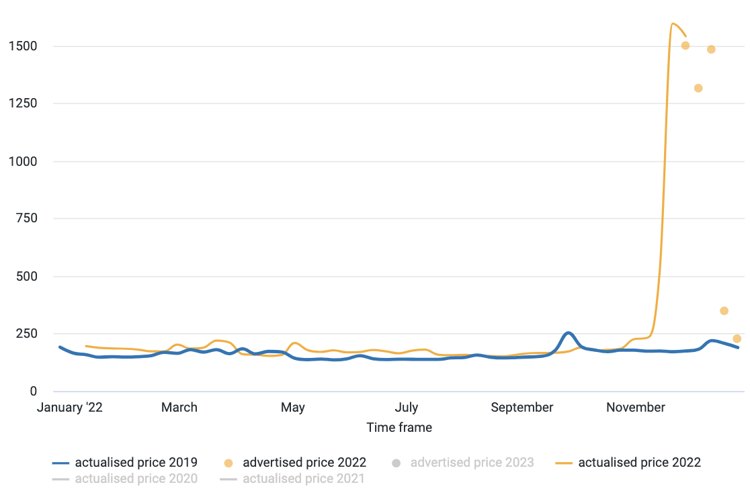 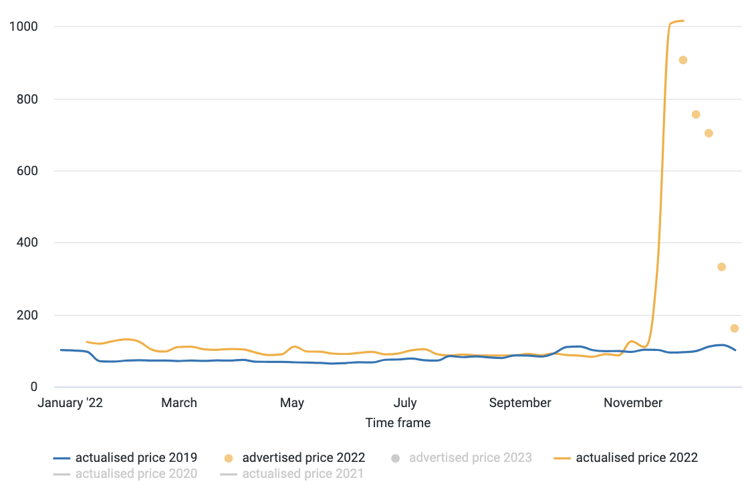 Where data is available, 3-star properties have a noticeably weaker price growth than either of their more luxurious counterparts, further demonstrating that this year’s world cup clientele are largely wealthier than the typical fanbase we would see at a world cup.

With prices also high for food and beverage in Qatar, this is an expensive tournament for fans. That total trip cost may be out of reach for many who typically would attend a world cup in Europe or South America, for example, which is another reason this is set to be a smaller-than-average world cup in terms of attendance.

That pricing boom at the top of the market, where most supply exists in the Qatar hotel sector, has come at a cost for the individual fan and those still aiming to get to the tournament should not expect prices to fall too drastically as the tournament progresses. Yet, more unexpected pricing trends have developed in Doha, which we will explore further, later in this article.

As we have seen above, like most World Cup tournaments the predicted demand and the response by hoteliers has been strong, creating astronomical prices in many instances.

Flight searches have been steadily rising for Doha across the year, a trend likewise seen to a lesser extent in other key regional cities as well. Year-on-year from November 2021, the volume of flight searches has increased 13 times for Doha and tripled for Manama, while Abu Dhabi is at 2.8 fold, and Dubai at 2. 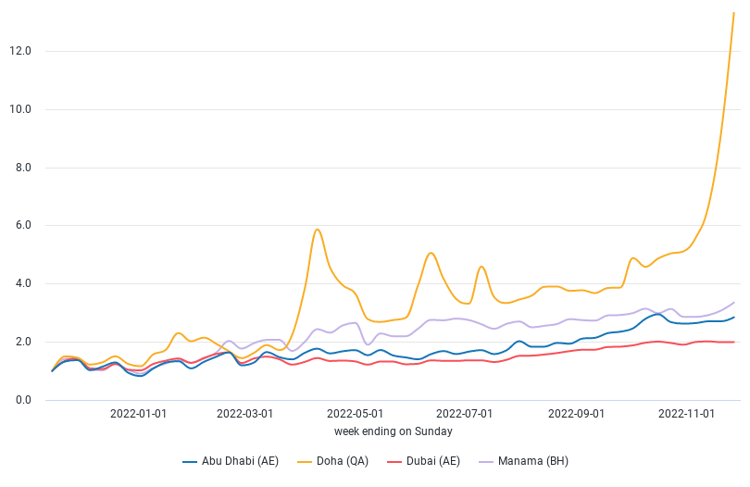 Until mid-October hotel prices were marching steadily upward for Doha, which correlated with the increase in flight and hotel search volumes. Comparing prices for Doha on the 17th of October for the next 60 days, to where they were 30 days prior, they continue to trend strongly upwards, with hoteliers moving prices up 58%.

However, market conditions in Doha are proving to be quite dynamic. As the beginning of the tournament drew closer, advertised prices started falling for the first time. On the 9th of November hotel prices for Doha had decreased by 34%, compared to where they were 30 days prior, for the next 60 days. 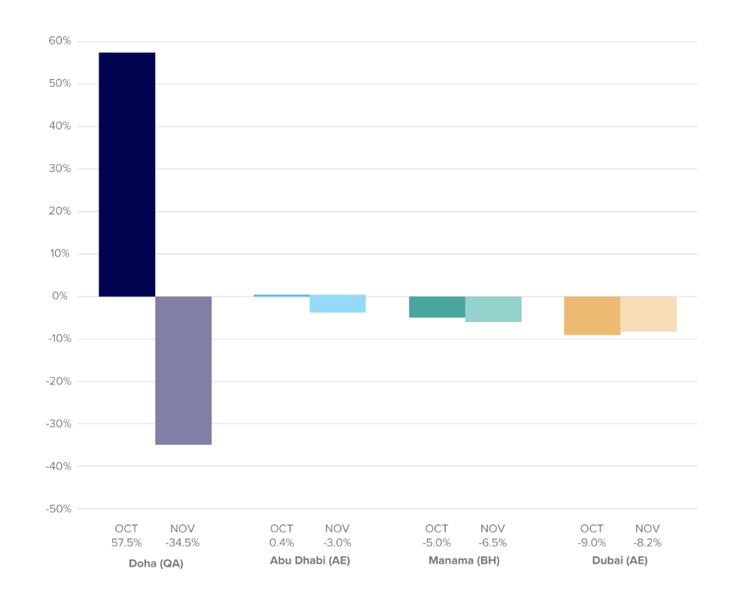 Following the more aggressive price drops seen at the start of the month, it appears that rates in Doha have stabilised slightly -  hotel prices are down just 4.3% compared to 30 days ago (for 60 up to days into the future). Dubai, on the other hand, is currently seeing relatively more drastic price changes, falling 9% over the same time period.

Hoteliers in the region were clearly confident that the traditionally high level of demand for the world’s premier sporting event would be able to support the vastly elevated pricing. But, as it turns out that isn’t the case, as hotels in Doha still have capacity throughout the tournament period.

Our data showed that during the opening week of the cup, only 77% of Doha’s hotels were not reporting any availability - which means they were fully sold out, operating with very strict length-of-stay policies, or simply closed. And at present, when looking at the date of the World Cup final, on the 18th of December, the ratio of unavailable hotels falls to 54%.

Therefore, hoteliers in Doha have been lowering their prices in order to capture last-minute bookings and lift their occupancy. 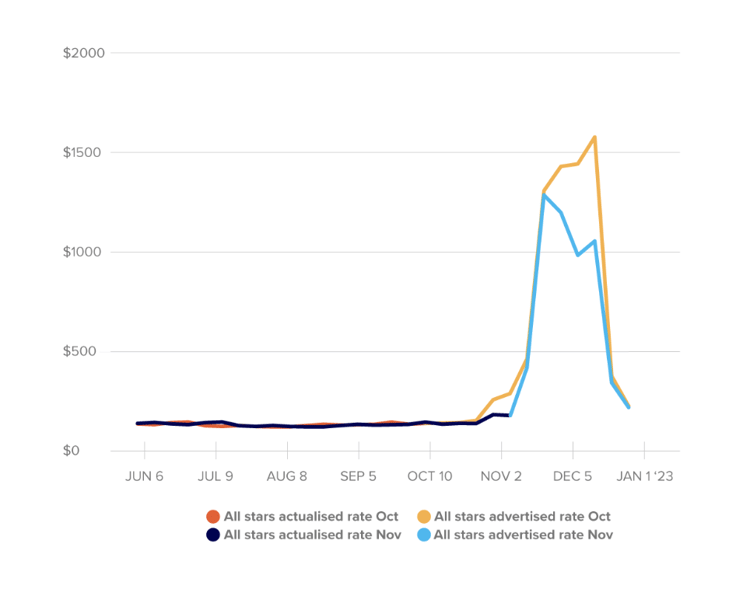 Analysing the most recent data from the 28th of November, the average hotel price (across all-star ratings) for the final week (12th to 18th December) has gone up a little compared to the 9th of November, now at $1,079.

Although travellers looking to experience the tournament could have made a saving by booking late, with prices still averaging over $1,000 a night, hoteliers in the Gulf may need to continue dropping rates to secure late bookings over the remainder of the tournament.

The hotel price decrease of 34% in Doha, from mid-October to early November was a wholly unexpected move by hoteliers in Qatar and opens up questions as to why occupancy rates were stagnating in the build-up to the tournament.

But, major events disrupt demand curves and create unpredictable, or even unprecedented, situations. At these moments real-time data is critical to capitalise on the situation, as seen above.

Hotels need to be matching true demand in the market. With prices that are too low, hoteliers risk leaving money on the table when their rooms sell out early at rates lower than the level supported by the market. However, overestimating the demand generated by an event with overpriced inventory means you are likely to lose bookings to your competitors, which diminishes your total market share and has potentially damaging long-term effects on your brand.

Real-time market intelligence with a strong predictive demand capacity, in combination with advanced rate intelligence, enables you to fully grasp demand and pricing trends in your market, so that you can take appropriate action to optimise revenue before your competitors.

If you would like a more in-depth analysis of the changes occurring across Qatar's hotel market and the Middle East region as a whole, including alternative lodging and granular demand insights, please take a look at our latest report on the impact of the FIFA World Cup in the Middle East hospitality market.